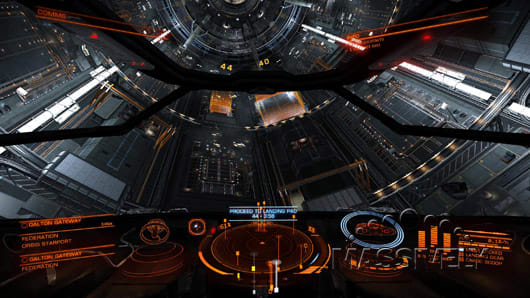 I like Elite: Dangerous. The game's not a revelation at this point, but it's a solid space shooter that could grow into something more. My favorite thing about ED is the docking. I imagine that most people find it tedious, but personally it adds an extra layer of escapism and conjures plenty of old-school flight sim nostalgia. And, of course, it's mechanically satisfying to fly an efficient approach, squeak a big boat through the slot, and micromanage your thrusters all the way down to the landing pad.

All I do in ED is take courier missions, investigate unknown signal sources, and dock. Technically I guess I'm progressing toward a bigger bank account and thus bigger ships, but my particular gameplay experience is pretty simplistic and pretty slow-paced. Is it sandboxy? Eh, not really, but at least it doesn't feel directed, linear, or otherwise pre-planned even when I'm purposely repeating gameplay patterns. There's this sense of being a small part of a larger world, which allows ED to deliver -- somewhat paradoxically -- bite-sized chunks of deep immersion.

What about you, Massively readers? Assuming you're a fan of immersion, have you found it in accessible games or do you think it mostly stems from prolonged engagement with more feature-rich titles?

Every morning, the Massively bloggers probe the minds of their readers with deep, thought-provoking questions about that most serious of topics: massively online gaming. We crave your opinions, so grab your caffeinated beverage of choice and chime in on today's Daily Grind!
In this article: accessibility, daily-grind, dangerous, david-braben, dock, docking, elite, elite-dangerous, frontier, frontier-developments, immersion, internet-spaceship, kickstarter, opinion, sandbox, sci-fi, space, spaceships, tdg, the-daily-grind
All products recommended by Engadget are selected by our editorial team, independent of our parent company. Some of our stories include affiliate links. If you buy something through one of these links, we may earn an affiliate commission.