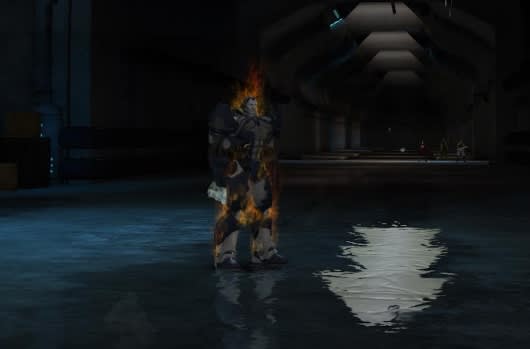 I've been holding onto this screenshot for the better part of the year for a time when the world entire would need a jolt of City of Heroes to get it through the next day. I think that today is that day. Behold! A superhero!

Reader Michelle said that she was still traumatized by the game shutting down: "This particular screenie was of my last 50. He was a Fire Armor/Electric Melee tank named Demolition Companion. He was a clockwork that the Resistance attempted to reprogram but didn't complete, so he was broken (hence why he was on fire all the time) and very, very dangerous. In this shot he's standing in the sewers ready to wipe out some Resistance scum. (He was one of my only Loyalists.) I wish I'd gotten to RP him more."

Want to be featured in a future edition of One Shots? Send your favorite MMO screenshots to oneshots@massively.com, and don't forget to include your name, the name of the game, and a description of the scene. Large, colorful, UI-free shots that tell a story and really show off the game make for the best images. Look ma, we brought back One Shots!
In this article: bring-back-one-shots, city-of-heroes, city-of-villains, coh, cov, cox, f2p, free-to-play, freedom, galleries, gallery, ncsoft, one-shots, paragon, paragon-studios, pics-or-it-didnt-happen, reader-screenshots, reader-submissions, screenshot, screenshots, superhero, superheroes, user-submissions
All products recommended by Engadget are selected by our editorial team, independent of our parent company. Some of our stories include affiliate links. If you buy something through one of these links, we may earn an affiliate commission.