Merry Christmas, game fans: Both Xbox Live and PlayStation Network are down this morning, apparently due to a denial-of-service attack. The notorious hacking group Lizard Squad -- which already carried out earlier attacks on Microsoft and Sony -- has claimed responsibility on Twitter for these latest outages. While Lizard Squad's role in all of this remains unconfirmed, the group did threaten last week to take down Xbox Live and PSN, according to Business Insider.

Regardless of who's behind this, the timing is obviously terrible: Plenty of people surely received one of the two consoles as Christmas presents today, while many more gamers would have happily spent the afternoon in front of the TV. In the meantime, both Sony and Microsoft have acknowledged the problem, with Sony issuing a tweet and Microsoft posting a message on its website: "We're working to address this as quickly as we possibly can," reads its status website. "Thanks for your patience, Xbox members." In an email, a Microsoft spokesperson declined to comment further or say when the company expects to restore service. We've also asked Sony to comment and will update this post if and when it does.

10,00RTS and we will stop smacking #Xbox and #PSN offline

We are aware that there have been issues reported with PSN. Thanks for your patience as we investigate.

We're aware users are having issues logging into XBL & are actively working to resolve. Please visit http://t.co/99xfLNN0o8 for updates ^JX 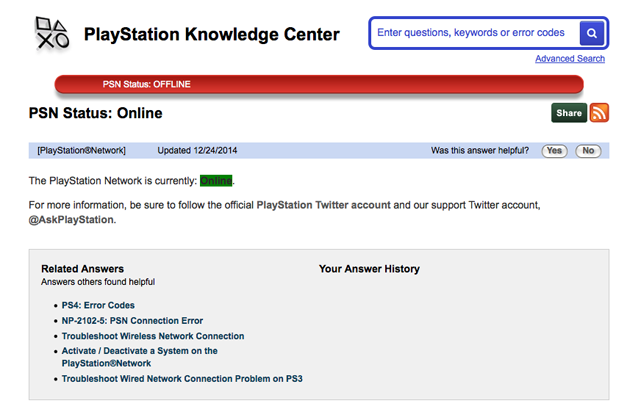 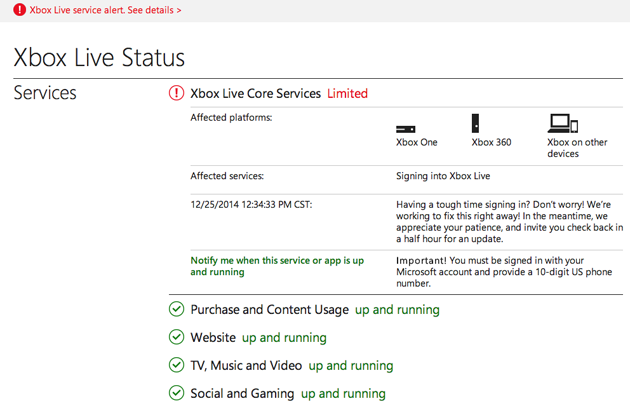 Update: Xbox Live appears to be back online in some capacity (according to the Xbox Live status page), and PlayStation Network remains down as of 10:00PM ET. Megaupload's Kim Dotcom is claiming responsibility for trading vouchers to his service with hacking group The Lizard Squad in exchange for the group ceasing its claimed attacks on Xbox Live and PSN.

Update 2: The hacking group claiming responsibility for the attacks on PSN and Xbox Live says it is no longer engaged, and that the current outages are "just the aftermath." A tweet from the group announced as much, seen here:

Attacks were stopped around 2 hours ago, the current downtime is just the aftermath.

Update 3: Core Xbox Live services finally appear to be up-and-running, with only a few apps (namely IGN, Maxim, and MLG.TV) still suffering outages. PSN is, according to Sony, still down.

Update 4: At last, Sony's PlayStation Network is back online. Hooray!

Via: VentureBeat, Business Insider
Source: PlayStation (Twitter), Lizard Squad (Twitter)
In this article: ddos, denial of service, DenialOfService, microsoft, playstation, playstation network, playstationnetwork, psn, sony, xbox, xbox live, xboxlive
All products recommended by Engadget are selected by our editorial team, independent of our parent company. Some of our stories include affiliate links. If you buy something through one of these links, we may earn an affiliate commission.