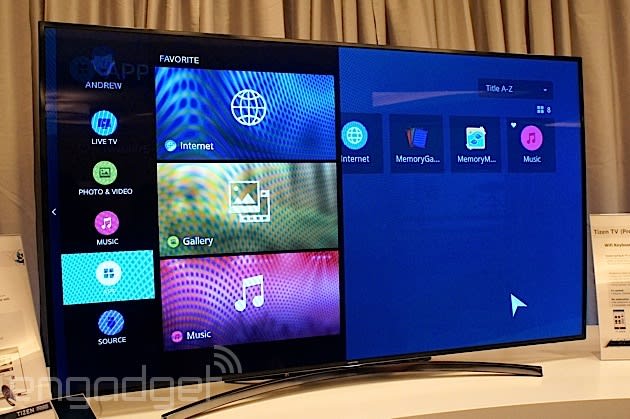 This summer Samsung showed off prototype HDTVs powered by its homegrown Tizen OS (pictured above and in the gallery), and things have apparently progressed far enough for the company to go all-in on the software next year. While Tizen hasn't taken over on phones or smartwatches yet, Samsung says every one of its 2015 smart TVs will be based on it. So what can the TVs do? Other than run PlayStation Now for cloud-streamed gaming, they can stream TV to Samsung mobile devices that are nearby. It uses Bluetooth LE to detect devices in range then WiFi Direct for the connection, and can work even when the TV is off. Samsung demonstrated a Google TV once upon a time, but it apparently isn't into helping the folks from Mountain View push Android in the living room. We should get a better sense of how the new platform works, including a revamped Smart Hub UI, next week in Las Vegas -- see you in 2015. 8
Source: Samsung
In this article: ces, ces2015, hdpostcross, hdtv, mobilepostcross, samsung, smarttv, tizen
All products recommended by Engadget are selected by our editorial team, independent of our parent company. Some of our stories include affiliate links. If you buy something through one of these links, we may earn an affiliate commission.