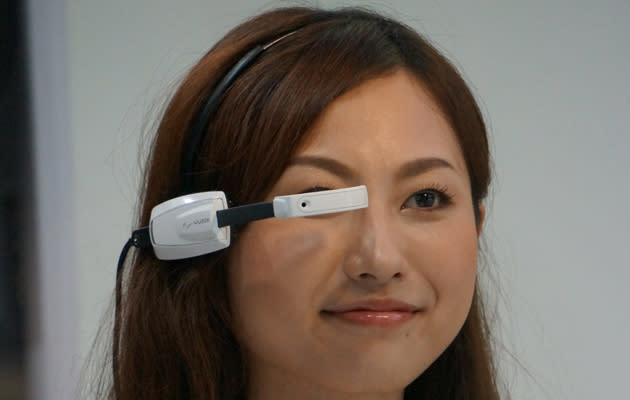 Intel clearly sees big potential in the smart eyewear market. In addition to putting its processors in Google Glass and teaming up with Luxottica to create high-tech glasses, it has now invested major cash in internet-connected eyewear-maker Vuzix. According to Vuzix, Intel has just bought $24.8 million of its stocks making up 30 percent of the company. The chipmaker hasn't replied to our request for a statement yet, but the companies' press release says Intel will have "the right to vote with the holders of Common Stock on an as-converted basis, and has the right to appoint two members to Vuzix' Board of Directors, in addition to the Company's current five members. "

If you recall, Vuzix is the creator of the M100 smart glass showcased at the 2013 Consumer Electronics Show. Since that time, the device has gone through a number of upgrades, including the addition of offline support for its Nuance voice control feature and the ability to use the Android-powered gear with iOS devices. In January 2013, the company announced that it's developing smart sunglasses you'd actually want to wear -- a project that could benefit greatly from Intel's investment.

Update (01/05/2015): An Intel spokesperson got back to us with the company's official statement:

The growth of wearable technology is creating a new playing field for innovation, and Vuzix's expertise in the design and production of waveguide optics positions them well to compete in the emerging smart eyewear segment. This investment underscores Intel's goal of accelerating the market for wearable computing, and will help Vuzix move more quickly in developing its next generation smart glasses platform.

In this article: intel, vuzix
All products recommended by Engadget are selected by our editorial team, independent of our parent company. Some of our stories include affiliate links. If you buy something through one of these links, we may earn an affiliate commission.