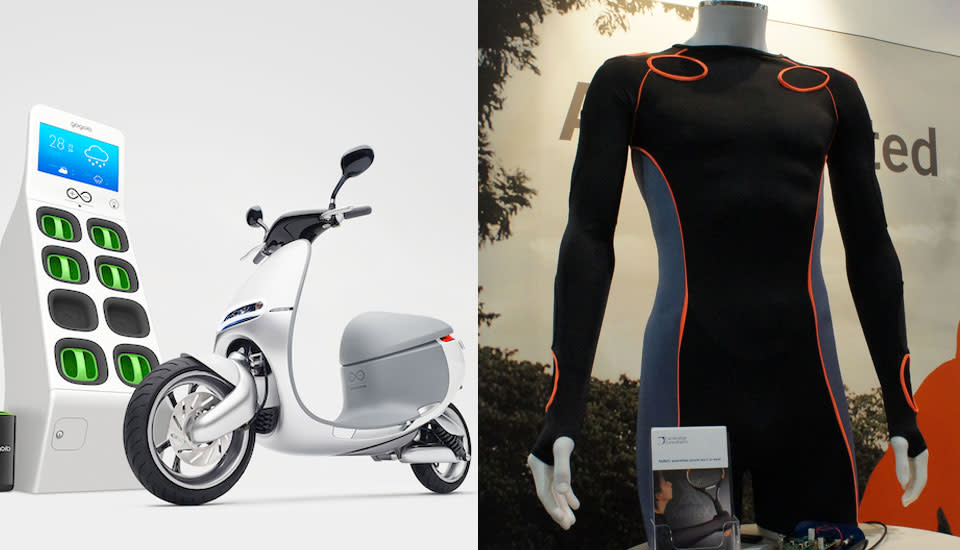 From one angle, there are so many similarities between Gogoro and Cambridge Consultants that it's hard to tell them apart. For instance, both are visionary companies that seek to redefine an existing market and both came out with innovative technology that no one had seen before. Another similarity between the two, of course, is that they joined us on the Engadget stage as our editor's choice.

First up, we have Gogoro, a business founded by former HTC executives that aims to revolutionize the world of electric transport. Firstly, consumers would buy a high-speed scooter, and then would subscribe to a network of stations where the battery could be swapped in and out when it was out of juice. It sufficiently intrigued our Nicole Lee that she had to get its CEO Horace Luke onto the stage to learn more about it.

Shortly afterward, a forgetful Dan Cooper invited Cambridge Consultants on to demonstrate XelfleX, a fiber optic exercise shirt that, unlike the OMSignal and Hexoskin, could provide pinpoint-accurate body-movement tracking for a future generation of fitness clothes. While the company isn't ready to bring the outfit to the market, it's certainly an exciting prospect for our next workout top.

In this article: Cambridge Consultants, CES, CES2015, Duncan Smith, Gogoro, Horace Luke, interview, Stage, video, XelfleX
All products recommended by Engadget are selected by our editorial team, independent of our parent company. Some of our stories include affiliate links. If you buy something through one of these links, we may earn an affiliate commission.