Flipboard TV expands to all Android and iOS devices 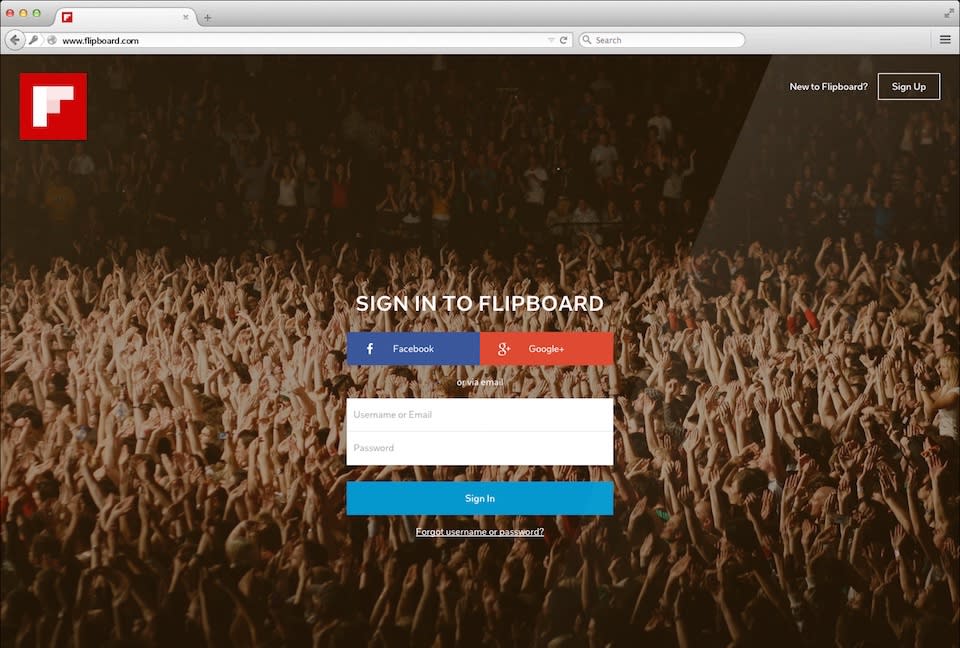 When Flipboard launched in 2010, news aggregation was still in its infancy. Google Reader was still the go-to RSS client for millions around the world and Twitter was only beginning to assume its role as a primary source of news. With its iPad app, Flipboard introduced a new way to digest content, with its slick magazine-style layouts and gestures that helped present articles and media in a more manageable way.

Fast forward to today; Flipboard finds itself trailing social networks like Facebook, which now play a pivotal role in what hundreds of millions of people read every day. Startups like Circa and Summly (before it was acquired by Yahoo) have also made a name for themselves by breaking down news into digestible snippets of information. It's probably time Flipboard did something about the rise of its competitors, which is why it's finally expanding beyond mobile and launching fully on the web today.

Flipboard coming to the desktop isn't a new idea. When former TellMe CEO Mike McCue and Evan Doll, a former Senior iPhone Engineer at Apple, incorporated Flipboard in 2010, the iPad wasn't even around. "It was never supposed to be an iPad app," says Flipboard's design lead Didier Hilhorst, "but web technologies weren't as advanced back then as they are today."

Back in July 2013, Flipboard showed us where it was ultimately headed with the launch of Magazines on the web. This allows Flipboard users to subscribe to magazines and "flip" stories from right within the browser, but because the content is manually curated by prominent members of the community, it's limited to specific topics of interest. So what does today's launch bring? Well, if you're an existing Flipboard user, the experience is mostly the same, albeit larger. Bigger screens inevitably offer more space, so Flipboard is utilizing endless scrolling to deliver more of what you want to see but also help you personalize your feed. "We wanted to keep things natural on the web and not force things," says Hilhorst. "We think we've found the right balance between a beautiful layout and keeping a detailed feed."

It's taken roughly a year and a half for Flipboard to get its web version just right. The company originally attempted to include the familiar swiping mechanic found in its mobile apps, but it didn't translate well when used to navigate large collections of content, so it was scrapped. You still get the same news hits, summaries, inline video, social updates and recommendations that are close to your interests, though, but they'll now be intelligently arranged depending on the topics you've subscribed to.

That includes fullbleed layouts that place striking images in your feed. Flipboard employs a clever algorithm that determines the size of the original source image and works out whether it can be displayed in its own full-width panel. It also checks where best to place headlines, works out the dominant hues inside an image and color-codes sections to match. The company's been careful not to maintain a completely monotone layout, breaking up content to let you know where you are and what topic you are focused on. For Flipboard, a complete move to the web is about "closing a lot of loops." Before, if a user sent stories they'd found through the app to a friend who doesn't use the service, they'd be sent directly to the source article and the company is no longer part of that relationship. No longer reliant on specific platforms, Flipboard can now keep users inside its property, building influence while it gets to know their individual habits.

Hilhorst notes that teachers all over the world are now using Flipboard to curate content and share recommended reading lists with their students. Because the web is ubiquitous, Flipboard hopes that the barrier to entry is now much lower, giving users more incentives to curate and combine all of their interests into one cohesive platform.

In this article: flipboard, news, web
All products recommended by Engadget are selected by our editorial team, independent of our parent company. Some of our stories include affiliate links. If you buy something through one of these links, we may earn an affiliate commission.