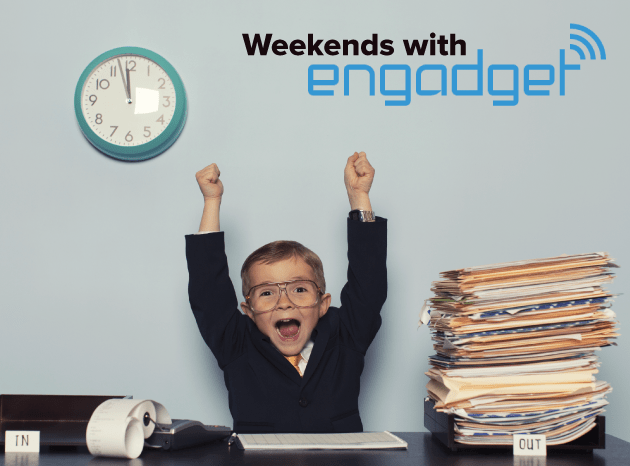 In this Weekends with Engadget, we explain how photos can fade in the internet age, help you select the perfect connected sex toy for your Valentine and contemplate the best way to buy sneakers. All this and more -- just read on past the break.

Anonymity is dead and other lessons from the Silk Road trial Silk Road, the online black market for drugs and other illicit goods, has been shut down and its creator is behind bars -- but how did the FBI pull it off? We explore why some members of the security community don't buy the story the feds told the world. Here's what you could buy with Apple's $700 billion market cap Apple's market cap has reached $700 billion. What would you do with that practically unfathomable amount of money? Buy a nice car? Send several kids to college? Tell us in our poll. If you're in the market for some new gadgets, we've got great news -- we just updated our buyer's guide. Check it out for reviews of MSI's GT72 Dominator gaming notebook, the Sony Xperia Z3 Tablet Compact and other gear we can't wait to grab for ourselves.

Cortana made me a better gambler, but I'm never listening to her again Should you make your own luck, or trust Microsoft's Cortana when making a gamble? We placed a few bets on English Premier League matches to test the Windows Phone assistant's advice.

Nike's SNKRS app puts a shoe store in your pocket Adidas may have the Yeezy Boost in its arsenal, but Nike has just created an app that any "sneakerhead" would be remiss not to download. SNKRS allows you to easily access your Nike account from your phone, place orders and even gets you free shipping. It turns out digital photos can fade in a way similar to their physical counterparts due to the process of copying and compressing files. Artist and photographer Pete Ashton explores the concept in a recent piece called "I am sitting in stagram." Annie Easley accomplished a lot during her time with NASA -- she worked on software that led to spaceflight, and even helped create the technologies that ultimately led to hybrid vehicles. She was also a pioneer, as one of the first few African-Americans in her field. Read how she overcame discrimination to help make history. Whether you're itching for more cowbell or just need a Wayne's World fix, finding your favorite Saturday Night Live sketch just got a lot easier. In celebration of its 40-year run, SNL has come out with an app for iOS that features over 5,500 sketches made searchable by cast member and key words. Mattel is working on the kid's equivalent of a VR headset with its revamped View-Master. We go hands-on with an early version to find out what features the company is planning for its release in October.

In this article: Annie Easley, apple, google, Instagram, mattel, NASA, sex toys, silk road, weekend, WeekendsWithEngadget
All products recommended by Engadget are selected by our editorial team, independent of our parent company. Some of our stories include affiliate links. If you buy something through one of these links, we may earn an affiliate commission.