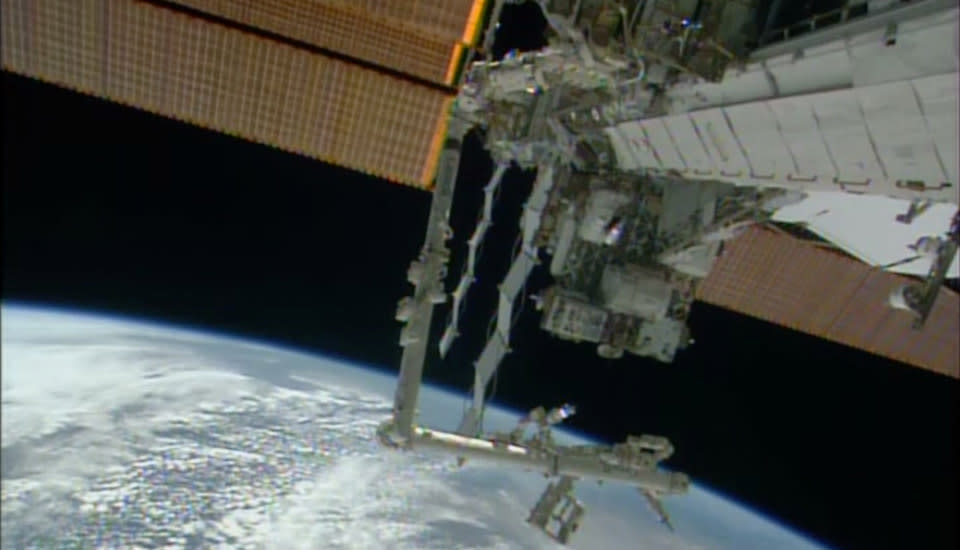 It's been two years since the Robotic Refueling Mission (RRM) was last active aboard the ISS, but now it's back with new functions to offer. The RRM (seen above) was originally an experimental set of tools that can refuel the propellant tanks of satellites while in orbit. With the help of Dextre, the station's robotic arm, the Satellite Servicing Capabilities Office (SSCO) has dusted the module off and outfitted it with a brand new tool called "Visual Inspection Poseable Invertebrate Robot." VIPIR gives ground controllers the capability to inspect satellites in low-Earth/geosynchronous orbit and swap instruments out if needed without having to send a crew to space. The tool resembles an old movie reel, as you can see above, though its cameras clearly signify that it's a lot more advanced than its lookalike. Two of those three cameras are tiny and are already used for medical purposes like endoscopy. According to SSCO deputy manager Benjamin Reed, the RRM team decided to add the new tool, because it's one of the community's most requested features:

When we asked the satellite community about their needs, we repeatedly heard how valuable an inspection capability could be for insurance companies and satellite manufacturers. Being able to see exactly how or why a component failed on orbit could mean the difference between launching more spacecraft with the same faulty design, or making a fix on the ground assembly line.

The RRM will begin testing and demonstrating its new capabilities later this year, so we'll most likely hear how VIPIR fared by the end of 2015 or early 2016.

In this article: iss, nasa, rrm, space
All products recommended by Engadget are selected by our editorial team, independent of our parent company. Some of our stories include affiliate links. If you buy something through one of these links, we may earn an affiliate commission.