Intel CEO wants its technology in every device (even golf clubs)

Intel and Google want your phone to see in 3D 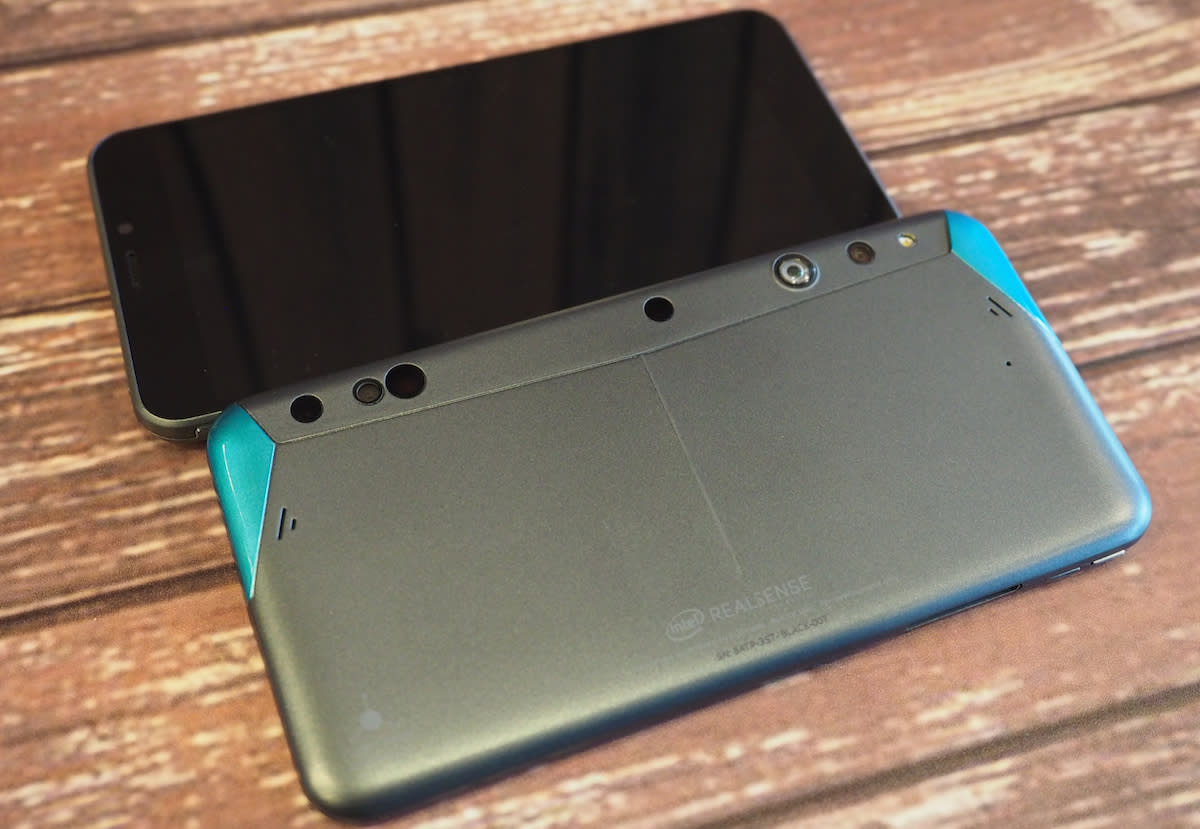 Intel's RealSense camera tech can sense and scan three-dimensional objects, while Google's Project Tango sensors are adept at motion tracking and 3D-mapping. It just makes sense for the two to come together, which is exactly what was announced today at Intel's Developer Forum. The two have developed a smartphone and software kit that integrates both RealSense and Project Tango technologies, as can be seen in the hardware prototype seen here. While this handset is strictly for developers at the moment, it offers a pretty good early look at what could potentially be in consumer phones later on. At first glance, the RealSense and Tango collaboration looks like a pretty normal smartphone. It has a 6-inch QHD display and is a little on the hefty side at 8.2mm thick and weighing in at 165 grams. The version that I looked at was running Android 5.0.1 Lollipop, and I was told that it has an Intel Atom X5 processor inside. Flip it over however, and you get to see the physical manifestation of the Intel and Google marriage. There's an array of sensors and cameras here that includes Intel's RealSense R200 camera with a fish-eye lens and an 8-megapixel sensor. It also has a couple of RGB cameras, IR cameras that offer "stereoscopic matching" and a laser emitter to give texture to scanned objects. An Intel spokesperson showed us a few demos of the hardware. At its most basic, you can use it to scan 3D objects and get three-dimensional portrayals of the environment in real-time simply by moving the phone around -- it's even able to map your movements with a breadcrumb trail. But because it also has motion-tracking, there's a great potential for games. He showed us a cube stacking demo, where he could create virtual walls and barriers overlaid atop the real-world environment -- sort of like an augmented reality Minecraft, if you will. Another demo that uses the depth sensor was a mesh builder built with the Unity engine. Using complicated peaks and valleys, he was able to recreate objects around the room, and then throw balls at them.

Last but not least, the Intel spokesperson showed us a demo called Tango Blaster, which lets you play a first-person shooter with a modified NERF gun. You can shoot at enemies as usual, but thanks to the phone's motion-tracking and depth-sensing tech, you can seek cover by going behind walls and find new robots to shoot by moving your phone-equipped gun around. "RealSense and Project Tango are really complimentary technologies," said Michael Liu, a product manager for RealSense who was helping to demonstrate the tech. "The camera's depth sensor works really well with Project Tango's motion-tracking." Interested developers will be able to snag one of the phones for themselves later this year, though it's unclear on how much it'll cost just yet. As for when we'll see this in consumer hardware, it probably won't be for awhile yet. But if the prototype I saw today was any indication, I wouldn't be surprised if 3D-scanning phones are everywhere in the not-too-distant future.

In this article: idf2015, intel, projecttango, realsense
All products recommended by Engadget are selected by our editorial team, independent of our parent company. Some of our stories include affiliate links. If you buy something through one of these links, we may earn an affiliate commission.