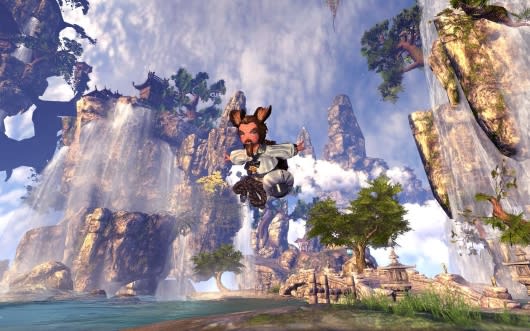 What MMOs will be releasing this year in the west? It's hard to say, exactly, although there are those who hold out hope that Blade & Soul might finally make the leap to the Americas and Europe. If pictures like this are any indication, we are missing out.

"I've recently stepped back into the game with the Chinese release and while I'm not very far along into the game (it's a little tough when I don't understand the language!) I'm completely in love with the art style and combat mechanics," reader Dynatos said. "I don't usually go the cute fluffy look, but I wanted to create a Summoner character to play with the mechanics of the class. Here he is gliding gracefully through the air after learning the first Qing Gong. Next up -- running on water!"

Want to be featured in a future edition of One Shots? Send your favorite MMO screenshots to oneshots@massively.com, and don't forget to include your name, the name of the game, and a description of the scene. Large, colorful, UI-free shots that tell a story and really show off the game make for the best images. Look ma, we brought back One Shots!
In this article: blade-and-soul, bring-back-one-shots, fantasy, galleries, gallery, martial-arts, martial-arts-mmo, ncsoft, ncsoft-korea, one-shots, pics-or-it-didnt-happen, reader-screenshots, reader-submissions, screenshot, screenshots, user-submissions
All products recommended by Engadget are selected by our editorial team, independent of our parent company. Some of our stories include affiliate links. If you buy something through one of these links, we may earn an affiliate commission.