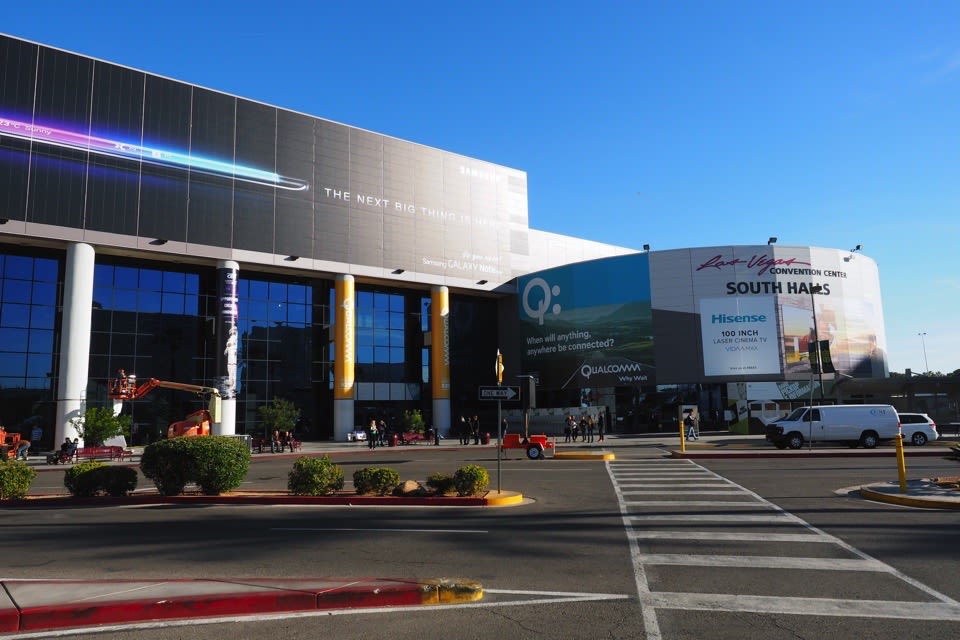 The team's slowly making its way to Las Vegas for the 2015 edition of the Consumer Electronic Show. Samsung's massive banner is already boasting that the next big thing is here, though, with the official start of the event still a few days off, only time will tell. Each year's show produces a darling category that garners all the media attention and this year's event will likely be no different. 4K sets? Wearables? Something Sony? Perhaps the connected home or even a complete surprise could be what everyone ends up buzzing about this week. The fun is just starting so keep your eyes glued to the site as we fill these pages with all that we see. We're about to start our yearly sift through nearly 2 million square feet of exhibit space and the unending crush of the faithful to bring you the very best of this year's CES.

For a closer look at what to expect at this year's show, check out our CES previews after the break.

Didn't we just leave Vegas? Tech journalists the world over are probably asking themselves that question right now, and with good reason -- the 2015 Consumer Electronics Show is set to open its many, many doors in sunny Nevada in just a few short weeks. To celebrate (and prepare for) the world's biggest tech expo, we're taking a closer look at the some of the industry's most prominent players, starting with Sony's storied history at the show and where it's going next ... READ THE FULL STORY

With webOS and wearables, LG's moving beyond just displays at CES

Samsung and Sony may grab a larger share of the CES fanfare, but don't count LG out. It has quite the annual presence in Las Vegas, too. The Korean company uses the tech industry's January soiree as the backdrop for a wide selection of product reveals -- everything from wearables to smartphones to 4K TVs -- and it has a sizable booth to house it all. It's almost a given that LG will offer up improvements to more of the same at this CES. But before we try to gauge what the company may have in store for 2015, let's first take a look at how far LG's come ... READ THE FULL STORY

Long before Transformers director Michael Bay choked onstage at Samsung's lavish CES 2014 press conference, the Korean company was just another electronics outfit begging for attention. But after decades at CES, Samsung is now the undisputed king of the show. Its blowout media events are the largest and most difficult to get into. Samsung Electronics CEO BK Yoon is kicking off the show next month by hosting the prestigious opening keynote. And it's one of the few tech giants left standing at CES, as Microsoft and others abandon it. Samsung's glorious rise mirrors its ascent in the mobile industry, and it's also yet another example of the company's oft-repeated formula for success: Time, money and perseverance lead to victory ... READ THE FULL STORY

Why Chinese tech giants could surprise you at CES 2015

The spotlight doesn't often fall on the lesser-known Chinese-speaking (both mainland and Taiwanese) companies that set up booth space each January at CES. But if you do pay close attention to their yearly reveals, you'll often find some of the show's more interesting gadgets. Brands like ASUS and Lenovo (among many others) have a knack for either inventing new device categories or pushing the limits of existing formulas. They virtually define the landscape for hybrid PCs, and they're often willing to stretch the boundaries of smartphones, wearables and TVs. In anticipation of the coming CES, we attempt to gauge just what each of these major Chinese-language players will bring to Las Vegas in 2015. But first, let's indulge in a little history lesson ... READ THE FULL STORY

In this article: ces2015
All products recommended by Engadget are selected by our editorial team, independent of our parent company. Some of our stories include affiliate links. If you buy something through one of these links, we may earn an affiliate commission.