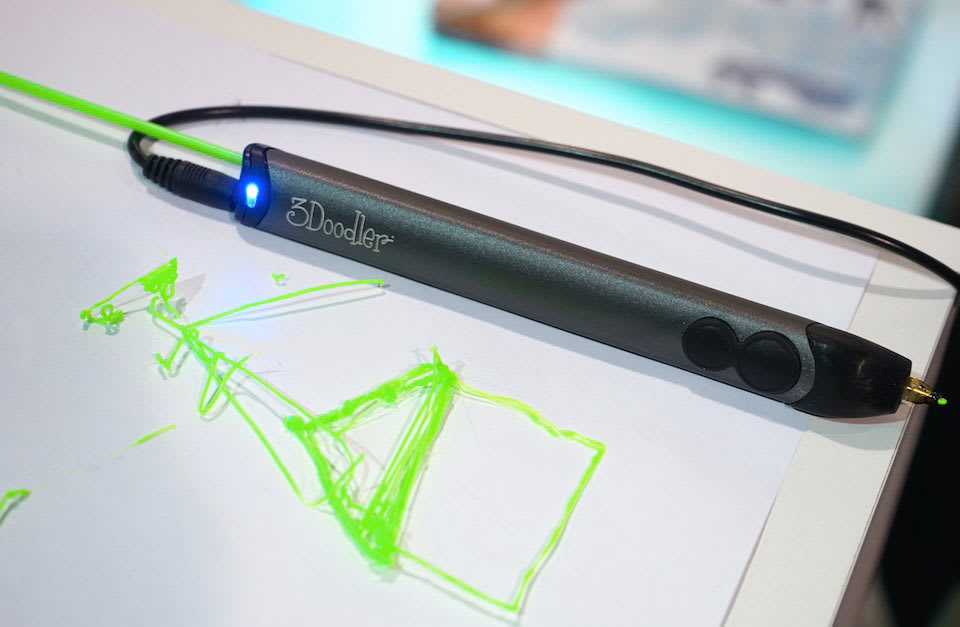 The original 3Doodler was fun, but it was also a little unwieldy and had a darn steep learning curve. Today, we played with the sequel, and practically everything's been substantially improved. It's now much, much thinner and it's made to a far higher standard than the slightly prototype-y debut model. There are two buttons to control speed, while a double button-press will "lock" the stream of molten plastic, meaning you can take your finger off and focus on creating.

That being said, you're going to melt through a whole lot of plastic rods before your creations start to represent what you, well, intended them to. (What you see are our attempts to draw a house and... something approximating the Las Vegas sign. Neither of the two editors is known for their artistic talent.) The thinner shape helps, and should particularly benefit little 'Doodlers, but the notable addition of a battery pack (the 3Doodler uses much less power) also frees your arm up to draw, and means you don't need a power outlet.

The company behind 3Doodler is also introducing a new type of plastic. It's calling it FLEXY -- intentional full caps -- that, as the name suggests, is a particularly bendable material. To demonstrate, we saw a wallet made of the stuff and even a jacket. The jacket's not gonna win any fashion prizes (a picture is incoming, we promise), but it's a good demo of the material, which will be sent out to 3Doodler's early-adopter Kickstarter fanbase in the next few weeks before going into full production. The new pen will be priced at $99 although you'll be able to get it for 10 bucks cheaper if you stump up the cash through Kickstarter ahead of the official launch.

In this article: 3doodler, 3dprinting, CES, ces2015, hands-on
All products recommended by Engadget are selected by our editorial team, independent of our parent company. Some of our stories include affiliate links. If you buy something through one of these links, we may earn an affiliate commission.