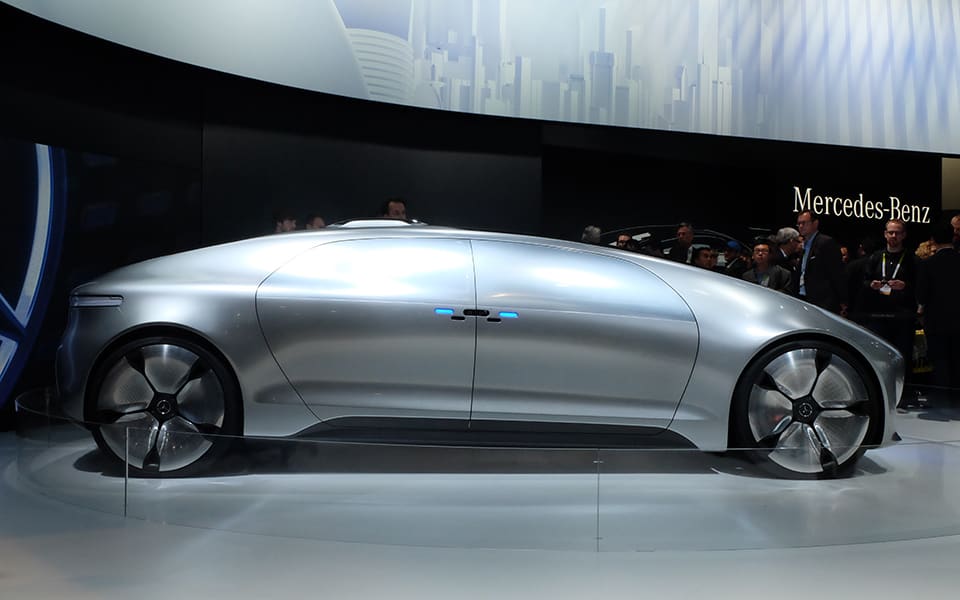 Automakers are big on self-driving cars this year. Audi, fresh from breaking both the autonomous speed and distance records (and driving me around a track at over 120MPH), announced the Prologue piloted-driving concept, and although Ford didn't have a new car to show, it still proclaimed it would strive to be the first to offer an autonomous vehicle "to the masses." But it's Mercedes-Benz that has stolen the show so far with its jaw-dropping, but unfortunately named F 015 Luxury in Motion concept.

The F 015 is full of awesome and downright ridiculous technology. The front grille lights up to show if the car is in autonomous or manual mode, and can also project turning signals, pedestrian crossings and other information to the outside world. Its rear does something similar, lighting up to spell out words like "stop" and "slow" to tailgaters. The exterior itself resembles something between a Prius and a child's imagining of what a future car should look like, and its interior is similarly striking.

Gallery: Up close with the Mercedes-Benz F 015 concept | 7 Photos Four "lounge seats" (which look like futuristic Arne Jacobsen Egg chairs) are able to swivel freely, letting each passenger choose between facing each other or the road ahead. Giant touchscreens line the doors and dashboard, and any passenger can take control of the car or give it destination instructions through remote control units and gestures. It's all very exciting, and very, very far away from going on sale to the public. Following the car's unveiling earlier this week, we spoke with Ralf Herrtwich, director of driver assistance and chassis systems at parent company Daimler, to find out how Mercedes will make the dream of the F 015 a reality by its self-imposed 2030 time limit.

There are three challenges preventing Mercedes and its contemporaries from bringing self-driving cars to market, according to Herrtwich. The first is the question of "the degree of autonomy" to give future cars -- how far "out of the loop" can the driver safely be? In Mercedes' future-facing concept, the driver can literally turn their back on the road, but that's a long way from becoming viable.

The second challenge is "the complexity of the traffic situation." Right now, you could buy a Mercedes and have it drive itself through stop-and-go traffic, but we're not yet at the point where the onboard systems can deal with more chaotic or high-speed situations. Driving in urban areas and country roads poses the biggest challenge, as you have the potential for cars, pedestrians and other obstacles to come at a car from all sides.

The third challenge is environmental. "These sensors work perfectly well in good weather and daylight," explains Herrtwich, "but they have limitations." Cameras aren't as effective at nighttime, and apparently radar systems "get frustrated" in the snow.

Herrtwich envisions these challenges as a kind of cube: "We're currently at one end of the cube, and [the F 015] is at the other. Over the next couple of years, you'll see us and others taking steps from one corner to the other." He believes the first advances are likely to come in the form of more advanced parking systems, autonomy in slow-moving traffic situations and the ability to engage autopilot on highways.

Mercedes' vision, despite its out-there concept, isn't too dissimilar to that of its fierce rival Audi. Last month, Audi's head of autonomy development, Thomas Müller, told me that self-driving will slowly proliferate over the years through more-advanced assistance systems. The two companies differ in the finer details -- Audi believes future drivers will act like "pilots" who aren't "looking out of the window all the time," but will nonetheless be ready to wrest control back from the car when necessary. That's obviously at odds with Mercedes' idea of swiveling seats and what's essentially a high-tech lounge on wheels.

Similarities between automakers' ideas shouldn't come as a massive surprise. The fourth, often ignored barrier between self-driving cars and our roads is regulatory bodies. Rather than working alone to push through new laws for autonomous vehicles, companies that routinely fight for the same consumers are working together to lobby the relevant organizations in the US and Europe. Of course, there'll be some differences in approach, but every carmaker needs to be on the same page when it comes to the broad strokes.

If a car knows it's going to crash, does it aim for the wall that could harm passengers, or risk hurting a pedestrian and protect its owner?

One thing that needs to be decided is liability. Who is to blame if a crash is unavoidable? Is it the programmer of the car, the carmaker, the car owner? The entire industry, along with lawmakers, will have to agree on the answer. This was touched on at Mercedes' CES keynote last night, where Chairman Dieter Zetsche also spoke about the ethics of autonomy -- if a car knows it's going to crash, does it aim for the wall that could harm passengers, or risk hurting a pedestrian and protect its owner? How can a machine make such a call? There's no doubt that the insurance industry will also want a say.

One thing's for sure: The promise of autonomy is putting swagger back in the once-troubled car industry's stride. Despite a continued threat from car-sharing (Zipcar), taxi (Uber) and all-electric car firms (Tesla), the old automakers now have something to work toward, and it's something they're all convinced we want. According to Mercedes, the F 015, or at least something like it, will be headed our way in as little as 15 years -- whether that's accurate is anyone's guess, but we should at least see more autonomous features trickle through upcoming models soon, and a boatload of far-out concepts in the meantime.

In this article: audi, autonomous vehicles, autonomy, ces, ces2015, concept, f015, interview, mercedes-benz, self-driving
All products recommended by Engadget are selected by our editorial team, independent of our parent company. Some of our stories include affiliate links. If you buy something through one of these links, we may earn an affiliate commission.