TiVo OnePass finds your favorite show no matter where it is 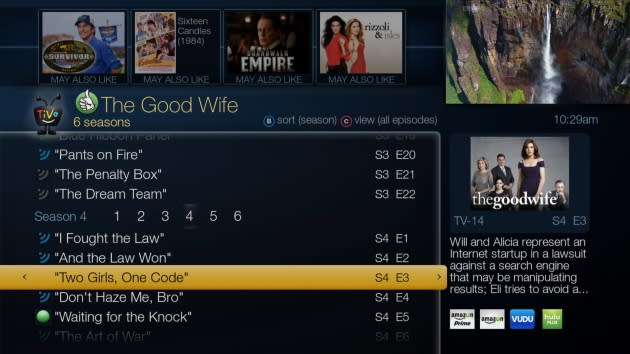 TiVo DVRs have been powering binge-watching since they first hit the market, but now that means something different. Instead of diving into an archive of recordings or even disc-based boxed sets, we're usually queuing up a few seasons from a streaming internet service, and now TiVo can help with that. An update coming to Roamio, Premiere and Mini devices will evolve the old "Season Pass" recording into OnePass, which searches out episodes across the multiple video apps the boxes have access to. It doesn't matter if they're recorded, have yet to air, pop up on streaming (Amazon, Netflix, Comcast VOD, Hulu, Vudu -- you get the idea) or are just coming soon to streaming, they all show up in one easy-to-navigate screen. It's a simple extension of what TiVo's various boxes already do, but it's something you won't get from cable/satellite, and set-top boxes like Roku or Apple TV usually don't have access to traditional TV sources. Once the update arrives, TiVo users' Season Passes will be switched to the new format too, but they won't actually display streaming options unless the user chooses to by adjusting the filter. It can also filter in/out shows that are only available for purchase or rental and not subscription streaming, and it only shows the services users actually subscribe to/choose to see. For even more details on how it works check out a forum post by Chief Design Officer Margret Schmidt breaking down exactly what it can do.

In other CES/TiVo news, it's still showing off the network DVR concept that we loved -- but no cable companies have bit on yet -- and it's added the ability to stream its cloud TiVo service to Chromecast and Roku. The mobile apps have upgrades coming too: iOS gets OnePass support in February and "premium sideloading" (the ability to transfer recordings from premium channels like HBO that, in some cases, had been blocked until now) soon. On Android, a completely rebuilt native app is coming soon, and OnePass is expected in March.

In this article: bingeviewing, CES, CES2015, dvr, hdpostcross, ivo, netflix, OnePass, premiere, roamio, RoamioOTA, SeasonPass, streaming, tivo
All products recommended by Engadget are selected by our editorial team, independent of our parent company. Some of our stories include affiliate links. If you buy something through one of these links, we may earn an affiliate commission.