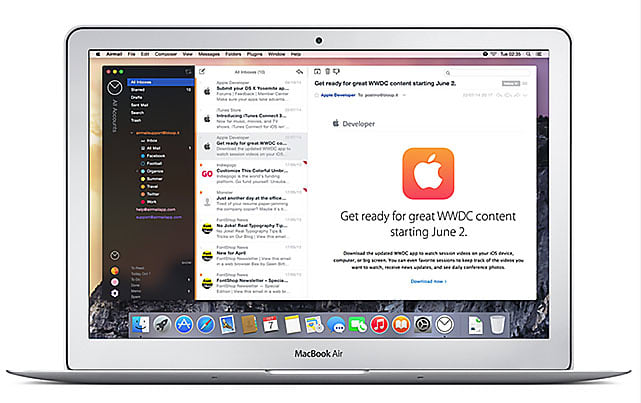 While Apple Mail for OS X is in widespread use and generally popular, it hasn't stopped developers from coming out with competing products that add to or extend the Apple Mail feature set.

Postbox and Mail Pilot are a couple of good options, and Airmail, which I'm looking at today, has had good reviews as well.

Airmail just released a big update to version 2.0 (US $9.99 in the Mac app store) that has added some very Yosemite-friendly features like iCloud Account sync, iCloud attachment, upload and link sharing, extensions to send mail from other apps and the ability to reply to messages from a notification banner.

The app supports many mail protocols including Exchange, iCloud, Gmail, IMAP, POP3, Google Apps, Yahoo!, AOL, Outlook.com, and Live.com. I was especially happy to see POP3 legacy support, as many third-party mail apps are dropping it.

I gave the app a try, and it quickly imported my Apple mail account. The design of the app is very clean, and I liked the integration with Apple's Calendar, Reminders, and other apps like Evernote, 2Do and Omnifocus. The app also supports a variety of plug-ins, and has a menubar icon. Apple, are you listening? Attachments can link to Google Drive, Dropbox, CloudApp, Droplr and FTP.


As I used the app, I wished for the ability to customize the buttons in the app. While Airmail's UI sports a very clean design, I'd like to eliminate some buttons that I don't use, and add some I think are essential. For example, a print button is totally absent from the toolbar. Of course you can print from the file menu, but an app with this number of features could really benefit from user customization.

The app worked properly with an old POP3 account. Search is very fast, and returned results are accurate. While I don't use Gmail, some users have reported issues with accessing Gmail with Airmail.

The app imported my folders from Apple Mail, but none of my Smart Folders. The developers say that feature is forthcoming. There is an extensive rules feature in Airmail, but I didn't want to re-create my Apple Mail rules from scratch. Messages can be marked as spam, and the app provides a unified inbox if you want one. Airmail also supports Apple's Time Machine, and has features almost too numerous to detail. A look at the app's web page will give you more insight into what Airmail can do, including offering extensive foreign language support.

There is a lot to like about Airmail. A few tweaks and I could be convinced to replace my Apple Mail client. As it stands now, Airmail is very good, extremely fast, and has many features Apple Mail doesn't have, but lacks a few critical features Apple does provide in the default mail app.

Airmail requires OS X 10.8 or later and a 64-bit processor.
In this article: Airmail2.0, Apple+Mail, Mac, mail, review
All products recommended by Engadget are selected by our editorial team, independent of our parent company. Some of our stories include affiliate links. If you buy something through one of these links, we may earn an affiliate commission.