BlackBerry will invade your wrist by bringing BBM to Android Wear 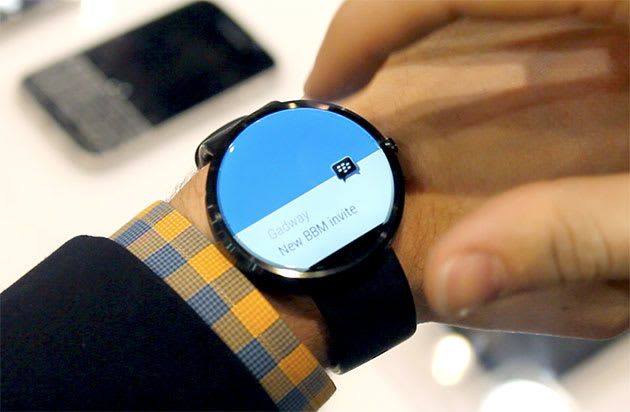 Messaging services like WhatsApp have slowly been trickling onto our extremities via Android Wear for what feels like ages now, so is it really any surprise that BlackBerry's getting in on the action now too? At a press breakfast earlier this morning, the company took a few moments to highlight its tentative plan to bring BBM to Google's wearables. Even in its unfinished state, the whole shebang works just the way you'd expect it to: You'll be able to view and accept friend invites right from your wrist, and speak your responses aloud for Google's machine brains to render into text. And the ETA for BBM's touchdown on your watch? BlackBerry's Jeff Gadway says you'll be able to nab it sometime in "early 2015," so you'd better make sure your contacts are in order. Just in case you're itching to see the early concept in action, go ahead a take a peek after the break -- you won't regret it.

In this article: android-wear, androidwear, apps, bbm, blackberry, ces, ces2015, hands-on, messaging, mobilepostcross, video
All products recommended by Engadget are selected by our editorial team, independent of our parent company. Some of our stories include affiliate links. If you buy something through one of these links, we may earn an affiliate commission.