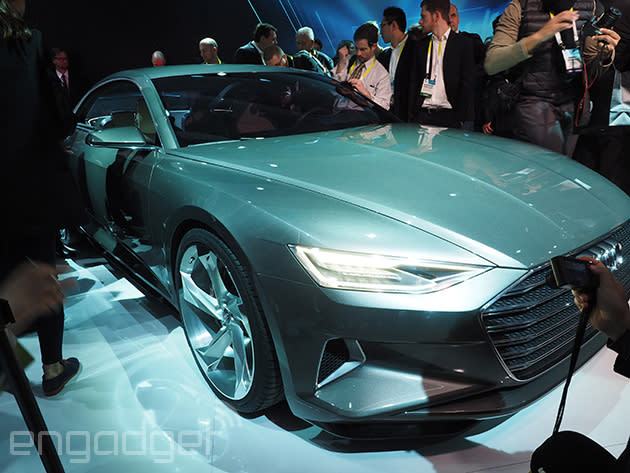 CES 2015, like last year's event, had a very large auto presence, perhaps even a banner year for CES. Expect it to grow again next year; in fact we wouldn't be surprised to see it start to run over into other halls. Not only did the likes of Ford, GM, BMW, Audi and Hyundai have a presence, but we also saw a new prototype launch and the very first glimpse of the new Chevy Volt. Imagine that, a week or so before the Detroit Auto show, the North American International Auto Show, and yet we got a very significant car teaser. Of course, it's no surprise that CES is getting so much attention from automakers; cars have become synonymous with tech and CES is still the pre-eminent tech show. Jump in to the post and let us walk you through the highlight reel.

So which tech companies are driving the trends at the show? More than most other makers in the space, QNX, with its QNX Car platform, is proving to be the most disruptive. Consider the little Ottawa, Canada, company has its fingers and code in the likes of Audi, Volkswagen, BMW, Porsche and Land Rover to name just a few. In fact, in early December QNX announced with Ford that Microsoft was out as the software provider for Sync and QNX was in. Little-known companies like QNX and Elektrobit are contributing so much to the space and most of us have never even heard of them. Of course, autonomous and semi-autonomous cars were everywhere. Notable was BMW's 360-degree collision avoidance and parking assist. Imagine pulling up to a grocery store or shopping mall and hopping out of your car only to see it park itself. Sound farfetched? Well it isn't; that technology exists now and works very well. We sat in the back of an i3 that could park itself a hundred times a day without incident in an unlit garage with the very smallest spaces imaginable. Audi has already demonstrated that it can self-drive as fast as its cars can go and so has BMW. Those things are simply extreme examples, beacons if you will, to make us feel OK about the technology. With these things as guidance, baby steps, we slowly approach the inevitable point where we can choose to hand the task of driving over to our cars. CES 2016 will be a bigger deal, for sure, and we've no doubt it'll be packed full of wonderful auto tech. Our CES, the wonderful tech show we worried about in the last couple years has a found a new direction. Will automotive be its salvation? It's too early to tell for certain, but judging by the car's uptake, we have lots of hope.

In this article: audi, bmw, CES, ces2015, qnx, video
All products recommended by Engadget are selected by our editorial team, independent of our parent company. Some of our stories include affiliate links. If you buy something through one of these links, we may earn an affiliate commission.