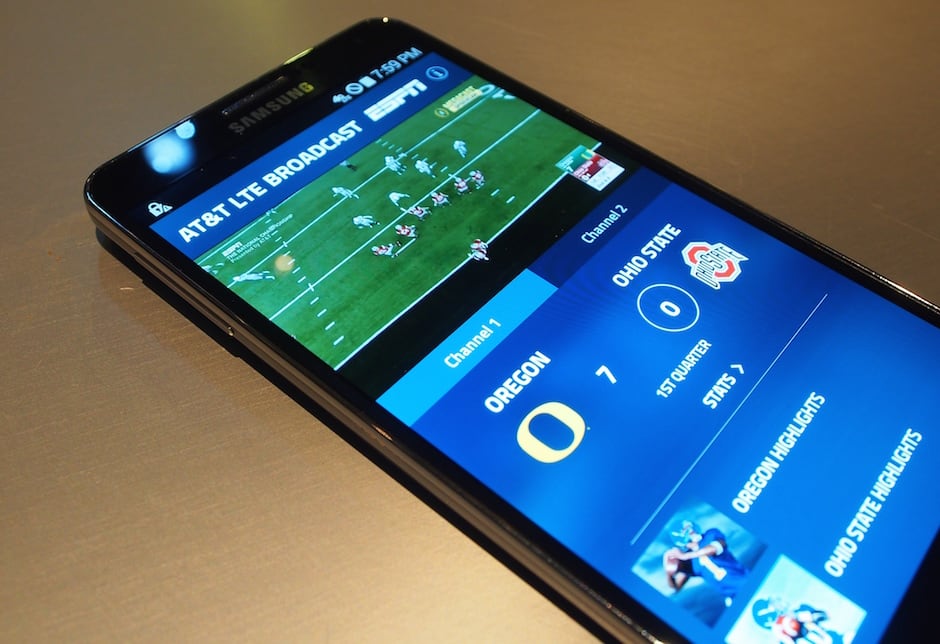 During the first-ever College Football Playoff National Championship, AT&T showed off a working demo of a new version of its Long-Term Evolution network: LTE Broadcast. With this, the wireless carrier is hoping to alleviate the congestion problems consumers face when they are in highly crowded places -- such as professional sports stadiums. AT&T's been working on LTE Broadcast for years, but until now has shared few details about it. In 2013, AT&T CEO Randall Stephenson said that the company was "all about architecting networks to deliver video," pointing out that the technology would be "mature in scale within the three-year time horizon." We're not quite there yet, but what I saw on Monday leaves me hopeful for the future of smooth, buffer-free television over LTE. For this particular demo, AT&T decided to build a mobile application that streamed two different live feeds related to the College Football Playoff championship game. Channel 1 consisted of the Spidercam angle, which gave you an overhead view at the action, while Channel 2 let you watch and listen to experts and analysts who were on an ESPN set. The video looked great and there were no buffering or stuttering issues to speak of -- AT&T says the demo was sending the connection at a 1 Mbps rate, allowing the stream to be relatively sharp, similar to what you would see over WiFi. In general, LTE Broadcast can deliver data in the same speed range as LTE, since the service uses that same network to fulfill its purpose. The idea here, though, is to maintain a quality consistency regardless of how many people are watching at the same time.

On LTE Broadcast, AT&T says it allocates a portion of its spectrum resources to deliver specific content to users, without any compromises (read: crappy video quality). And it can do that by sending the same stream of content to multiple devices all at once, rather than on a one-to-one basis, which is how the current LTE network works. Simply put, you're not sending any data back to AT&T's servers, only receiving it; since LTE Broadcast is designed to push out clear-cut content, AT&T doesn't have to worry about tailoring the experience for every single user. At a place like AT&T Stadium, home of the Dallas Cowboys, this also helps by taking the load off the major network, since those who decide to use LTE Broadcast would be connected to a different cell site. When there are more than 80,000 people with smartphones in one place, that's even better.

AT&T partnered with Ericsson, ESPN, MobiTV, Samsung and Qualcomm during the College Football Playoff demo of LTE Broadcast. The streaming app, created by MobiTV, was running on a Samsung Galaxy Note 3, which the carrier built specifically for this purpose. Qualcomm supplied the chip inside the handset; Ericsson brought the infrastructure; and, finally, ESPN provided the content. On that note, it's worth mentioning that LTE Broadcast isn't compatible with any device currently out on the market, and AT&T says it doesn't know what the plans for OEMS are.

The company adds that it has been exploring LTE Broadcast technology, which is compatible with all spectrum bands, as an add-on for LTE since the very beginning of its Long-Term Evolution efforts, but it's just now ready to display its progress. Naturally, AT&T is hoping to create buzz around LTE Broadcast, and it needs support from other firms to get its shiny new network beyond the trial stages. AT&T's president of network operations, Bill Smith, said, "Part of the reason for us showcasing it here is to get other potential partners interested." Now, whether it actually achieved that goal is too early to tell. At the very least, the carrier can feel confident that it managed to get ESPN, Samsung and Qualcomm on board for the very first public demonstration. 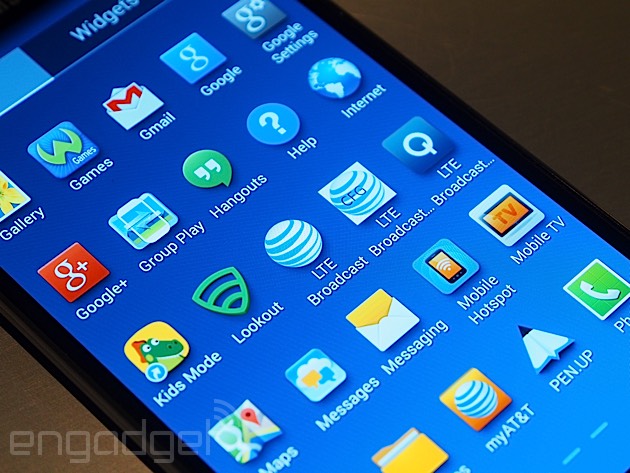 AT&T says there's more where that came from too. According to the company, the streaming app built to be shown inside a jam-packed stadium is only the beginning. "The stadium is only one use case; we wanted to show what our network can do," an AT&T spokesperson at the event said. "The market will dictate what it's used for."

In the future, LTE Broadcast could be used to deliver plenty of high-demand content, including software updates for smartphones and tablets. "We stagger updates because of so many people downloading at once," AT&T's representative said. "With Broadcast, you can take the load off and deliver specific payloads for those huge files." As for what kind of damage LTE Broadcast does to your device's battery life, AT&T wasn't willing to answer -- though it did say that, during the demo, it had been performing "especially well."

LTE Broadcast is, without a doubt, a great example of what AT&T's network can do. Unfortunately, at the moment there's not much subscribers can do with it. For now, you'll just have to deal with the fact that it exists, and maybe one day you'll have access to it. Let's hope so.

In this article: ATT, ATT LTE Broadcast, hands-on, LTE, LTE Broadcast, LTE-B, LTE-Broadcast, mobilepostcross
All products recommended by Engadget are selected by our editorial team, independent of our parent company. Some of our stories include affiliate links. If you buy something through one of these links, we may earn an affiliate commission.