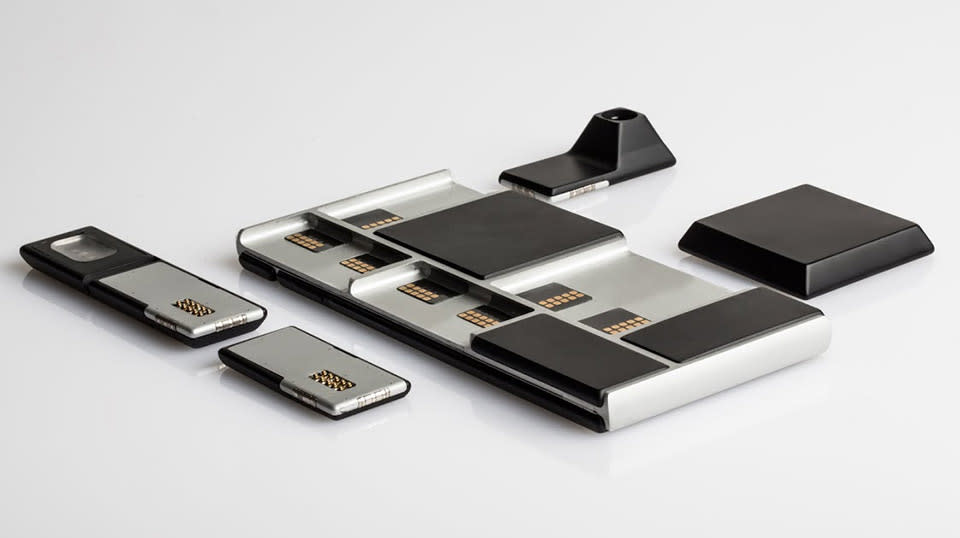 Long ago, Google once said it hoped to get an official, final Project Ara device -- the so-called gray phone -- onto the market by January 2015. It doesn't take a math whiz to realize that window is rapidly closing, but that doesn't mean Google's taking the whole modular smartphone thing any less seriously. Project lead Paul Eremenko shed a little more light on Ara's future at Google's second Ara Developer Conference, and dropped a few juicy details about forthcoming Spiral 3 Ara prototype in the process. He also unveiled the latest design for the Ara, which you can peek in the gallery below. Let's back up for a moment first: Google's been working with its so-called Spiral 2 prototype design (see below) since about last July and the search giant is getting more ambitious with its forthcoming prototype. You can simply look at the design to see that it's much more polished than previous iterations. Eremenko says we can expect the Spiral 3 to "match or exceed the functionality of a state-of-the-art smartphone today" with 20 to 30 third-party modules available for developers to tinker around with. On top of all that, the new prototype should feature day-long battery life, though Eremenko allows for a single battery swap to get users through the day. Throw in a high-end camera and support for 4G LTE connectivity (a big step from the 3G-only service the current prototypes work with) and you've got Google's vision of its new prototype in a nutshell. As it turns out, one of the most notable changes is one you as a user might not even notice. After receiving plenty of feedback from early module developer partners, Eremenko said the electro-permanent magnets that hold modules in place have been moved onto the endoskeleton itself. Why does that matter? Well, it means the people and companies trying to squeeze gobs of functionality into teensy modules have a little more room to work with. Considering that Ara devices could hardly boot reliably last time we saw them, this new performance push speaks to how much progress the teams have made in just a few months.

It'll be a while yet before you'll be able to claim an Ara device of your very own, but you'll be able to customize it when you do... just not in the way Google originally envisioned. In the early days, the Ara team talked up the notion of customizable designs created via 3D printing, but that turned out to be too dicey to complete with the time Google's willing to invest. Instead, we're getting a completely new design customization scheme based on something called dye sublimation, which will let Google decorate polycarbonate shells in full color with high resolution imagery.

In this article: ara, google, mobilepostcross, projectara
All products recommended by Engadget are selected by our editorial team, independent of our parent company. Some of our stories include affiliate links. If you buy something through one of these links, we may earn an affiliate commission.