Well, okay, that's kind of false. I will unfriend you if we're not actual, real-life friends, and I eventually forget how we knew each other. But that's not the point. The point is that my Facebook friends list is made up of people I know, or knew, in real life. They may not be people I speak to every day, or people I see in person with frequency, but they are or were a tangible part of my life: part of what makes me me. To put that more eloquently:

"I see it as my network: a digital representation of my network. An archive of the people I've encountered and come across. If I want to understand my story, my history, all of the ways that I've come about, this is one of those vehicles. It's almost like this weird digital therapy space where you can get to the heart of where you are via the people you've interacted with."

That's WNYC contributor Ibrahim Abdul-Matin in a December episode of the radio show/podcast New Tech City. I fully agree with that sentiment: For me, Facebook is the one bastion of personal space left online. I'm only friends with people I actually know (unlike Twitter -- shoutout to my man Mike Isaac for the hilarious tweets despite us never having met).

I've carefully curated my Facebook friends list (431 strong) from real life: It's a virtual directory of my actual life since sophomore year of college (2006!). That is intentional. I've lived in a variety of places, worked a variety of different jobs and gone to several different schools, so it's a pretty broad mix of people. I lived in Barcelona for a year in college, so there are a handful of folks who live in and around Barcelona. I lived in Philadelphia and attended Temple University, so there are a few dozen folks from Philly and many of them attended school with me. I grew up in Connecticut and worked in a Tower Records for several years, etc. You get the idea. 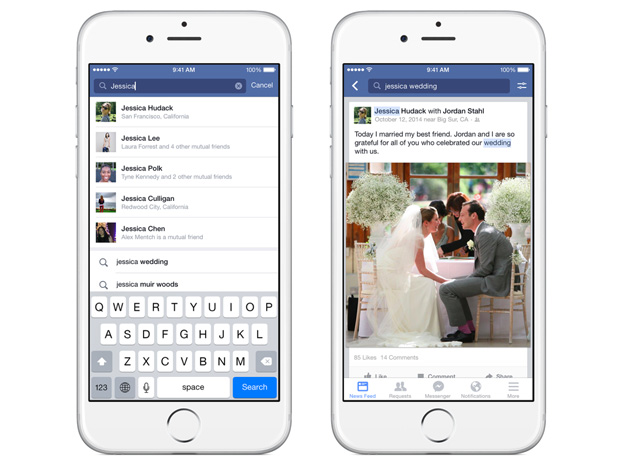 Most of the time, at worst, Facebook is boring -- a time-wasting dalliance of "I'm eating this fancy thing!" or "Look at my baby!" or "Which Sex & the City character are you?" (I'm such a Samantha). The occasional friend I haven't seen in 10 years might post a link to the National Report with accidental outrage, or maybe someone gets heated about guns; nothing that elicits anything beyond an eye roll.

Sometimes I add a comment, maybe even argue a bit. But always -- always -- it's a discussion. These are real-life friends after all. 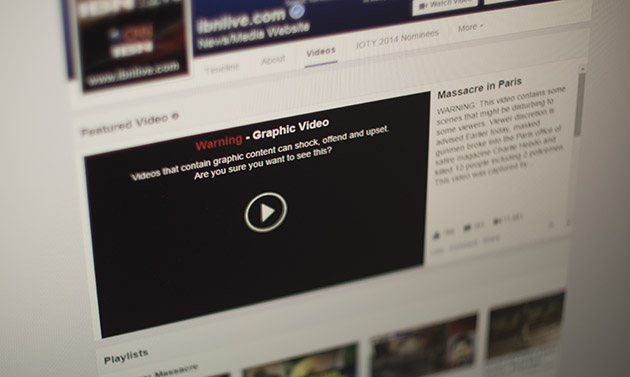 In early August, when an 18-year-old black man named Michael Brown was shot dead by a 28-year-old white policeman named Darren Wilson in Ferguson, Missouri, months of protest ensued. While the majority of the protests were non-violent, some involved looting.

This drove a wedge into my normal feed, as was assuredly the case with many other Facebook users. Instead of occasionally posting something I disagreed with, friends were suddenly posting things I found outright concerning. People I know to be not jerks -- people who have shaped my life and the person I am -- were saying all variety of ignorant nonsense. Not just any kind of ignorant nonsense, but the kind of base level, overtly racist junk that makes you ask what century you live in. Were these the same people I knew in real life?

I had a decision to make: whether to cut folks from my Facebook feed solely because I disagreed with them, or to engage folks I consider friends on contentious topics.

Given my stance on Facebook -- of curating a list of people I know in real life -- I felt obligated to respond. These are people I respect, who respect me. Perhaps more importantly, I don't want to surround myself with an echo chamber. Studies have repeatedly shown that people who surround themselves with other people who share similar political views will become galvanized in those views (read: less likely to consider other points of view).

As the abstract of a 2006 study on political polarization puts it (the emphasis is mine):

"This essay reports the results of a kind of Deliberation Day, involving sixty-three citizens in Colorado. Groups from Boulder, a predominantly liberal city, met and discussed global warming, affirmative action and civil unions for same-sex couples; groups from Colorado Springs, a predominately conservative city, met to discuss the same issues. The major effect of deliberation was to make group members more extreme than they were when they started to talk. Liberals became more liberal on all three issues; conservatives became more conservative. As a result, the division between the citizens of Boulder and the citizens of Colorado Springs were significantly increased as a result of intragroup deliberation. Deliberation also increased consensus, and dampened diversity, within the groups."

I'm happy to report that the results have been largely positive. The vast majority of Facebook discussions I have that involve "contentious topics" (read: equality, racism, gun rights, abortion, etc.) turn out well -- or at least amicably -- with both people having learned something.

But few people take this approach. Facebook provides two different options for making your news feed experience more comfortable. These tools aren't a bad idea, but they're easily used (by accident, I'd guess) to virtually isolate yourself from different perspectives. 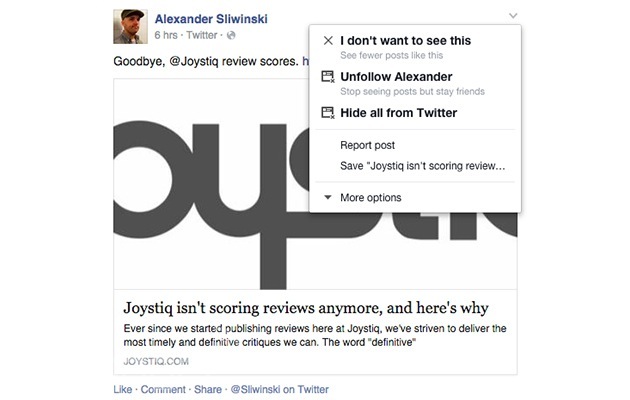 The first option is "I don't want to see this," which limits the number of posts you see from the user in question; the second is "Unfollow," which is reserved for people you're friends with (rather than, say, publications you follow). You remain Facebook friends, which removes any potential impact from a real-life friend thinking you've unfriended them, but you stop seeing their posts in your news feed. It's one step below the nuclear option (unfriending). Both options are just two clicks away.

I asked my Twitter followers (which pushes to my Facebook feed) how they handle "inflammatory stuff from real-life friends" on social media. Of the 20 or so responses I received between Twitter and Facebook, less than a quarter said they engage friends when they find statements offensive or wrong in some way. Most answered like this (warning that the example status below the response text is racist/awful): 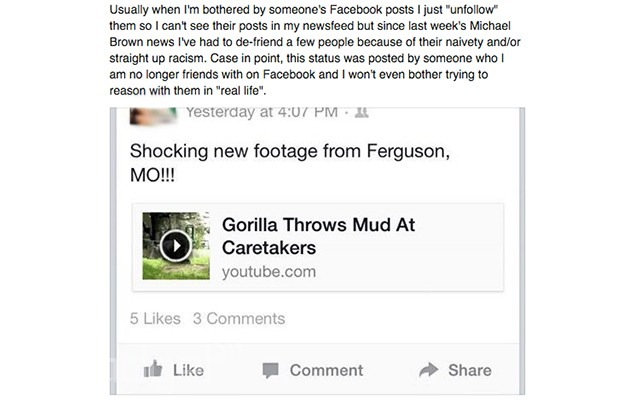 This was December 3rd, 2014, just over one week after the announcement that a Missouri grand jury chose not to indict Wilson in the death of Brown; The New York Times reported that "hundreds" were protesting outside the Ferguson Police Department that night. December 3rd was also the day that a grand jury in Staten Island, New York, chose not to indict NYPD officer Daniel Pantaleo, a 29-year-old white man, in the death of Eric Garner, an unarmed, 43-year-old black man.

In other words, it was peak timing for engaging with friends and discussing societal issues we often eschew in conversation -- especially social media conversation -- in favor of discussions about Kim Kardashian's provocative magazine cover, or John Travolta's hilarious mispronunciation of Idina Menzel's name. Sadly, though understandable, many folks instead used Facebook's built-in tools to make their online lives a bit more digestible.

So, where am I going with all of this? Nowhere in particular -- there's no grand point -- I'm just fascinated to hear how you handle these issues. Maybe I'm unique in how I use Facebook, but I doubt it! I've set up a poll to get a better idea of how you folks deal with similar issues, and I'd love to talk about it in the comments (or on Twitter, of course). Consider this one of those rare times that I'll end a piece with, "Head into the comments below and tell us what you think!" At least it's for a good reason!%Poll-90642%

In this article: facebook, mobilepostcross, people, socialmedia
All products recommended by Engadget are selected by our editorial team, independent of our parent company. Some of our stories include affiliate links. If you buy something through one of these links, we may earn an affiliate commission.