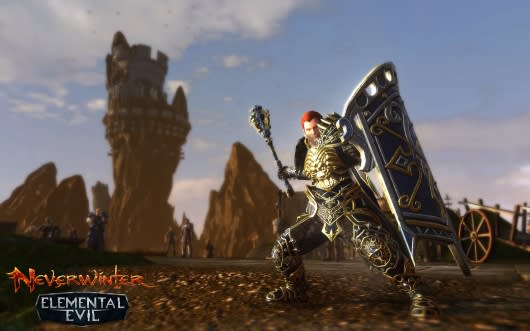 Elements are the "in" thing for 2015, especially in the Dungeons & Dragons universe. First we found out that DDO will be implementing the Temple of Elemental Evil this year, and now we've gotten word that Neverwinter's newest module will be called Elemental Evil (it's no coincidence; both titles have a relationship with Wizards of the Coast, who likes to do these tie-ins).

This module will be a significant one when it comes early this year. Elemental Evil will add a new class to the game, the Paladin, and increase the level cap from 60 to 70. The increased level cap means more skills and quests for all eight classes.

Cryptic also announced that future updates in 2015 for Neverwinter will include the player guild housing Strongholds system, the Xbox One launch, and the arrival of popular D&D characters.

[Source: Cryptic press release]
Coverage: Neverwinter
In this article: action-mmo, cryptic, cryptic-studios, ddo, dnd, dungeons-and-dragons, dungeons-and-dragons-online, elemental-evil, f2p, fantasy, free-to-play, housing, neverwinter, paladin, patch, patch-preview, perfect-world, perfect-world-entertainment, pwe, strongholds, turbine, turbine-entertainment, wizards-of-the-coast, xbox-one
All products recommended by Engadget are selected by our editorial team, independent of our parent company. Some of our stories include affiliate links. If you buy something through one of these links, we may earn an affiliate commission.