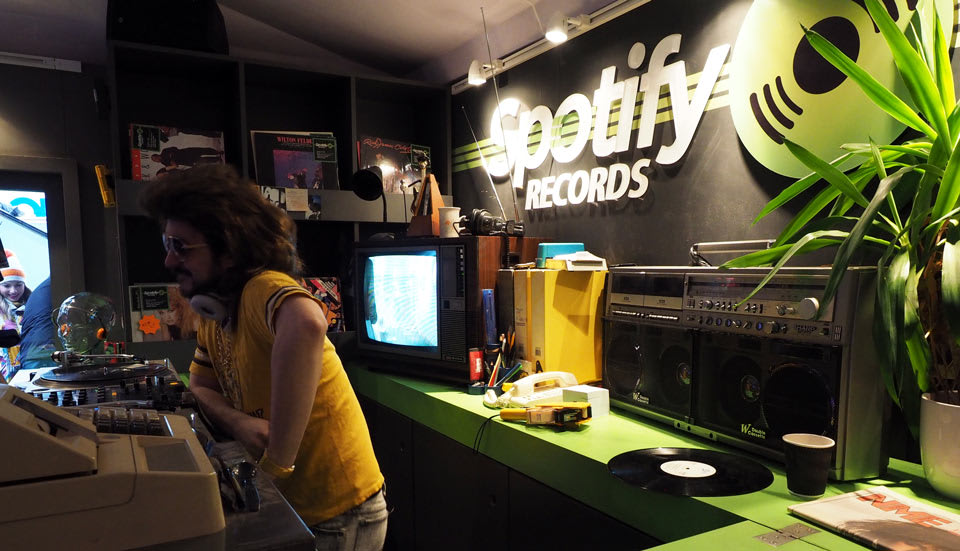 Have you ever wondered what a Spotify record store would've looked like in the '80s, or a Now TV-branded video rental chain? Me neither, to be honest, but that didn't stop Vodafone from including these fantasy locations in its retro-inspired "1984G Street." Set up a stone's throw from London's Covent Garden Tube station, the temporary, temporal anomaly was less 'street,' more handful of small pop-up shops with a nostalgia-meets-now vibe; much like Sony's PlayStation '94 20th anniversary store. It was just an elaborate PR stunt and brand awareness exercise, of course, as part of a Vodafone's ongoing campaign celebrating 30 years since its mobile network went live. It might've had something to do with 4G, too, given the name. David Hasselhoff rocked up in Knight Rider mode to officially open 1984G Street, which is fitting as he hasn't changed much in 30 years, despite eating more than his fair share of burgers off the floor. The morning I arrived, the Hoff and whatever crowd he drew had long departed, giving me plenty of opportunity to explore the strange installation.

Highlights included the retro-styled Vodafone store, which had various mobiles from the '80s on display, and the "4G Arcade," because who knew there's such a thing as a Temple Run arcade machine? Joining a Pac-Man cabinet and an Indiana Jones pinball table was also an absurdly large model of an old Nokia, in case you wanted to play the most frustrating game of Snake ever. Spotify Records and the Now TV video rental store were slightly more promotional outlets, nodding to the services offered as perks with some Vodafone contracts. Spotify was doing some special playlist offer and Now TV, a lucky-dip situation where you could win free movie passes, popcorn, etc. While I avoided both of these in a miserable, non-participatory sort of way, the attention to detail throughout the little shops was commendable. The Now TV store was full of VHS boxes, complete with Breakfast Club poster, bargain bin and fuzzy CRT above the counter. Spotify Records was wall-to-wall with original vinyls, and even the attendant's cubicle in the 4G Arcade was littered with '80s-era knick-knacks.

Everyone "working" there was also dressed appropriately, with the worst of them behaving in-character, which exacerbated the drawn-out, cringe-like feeling one gets from attending a live marketing experience. That being said, I might've gotten more "into it" if I was the one being paid weekend rates to play pinball all day while waiting for the free RUN DMC performance to start. Anyway, if you didn't stumble across 1984G Street yourself, couldn't be bothered, or simply didn't want to, then enjoy the visual tour. Or, go watch Breakfast Club.

Source: Vodafone
In this article: mobilepostcross, nowtv, skynowtv, spotify, uk-feature, vodafone
All products recommended by Engadget are selected by our editorial team, independent of our parent company. Some of our stories include affiliate links. If you buy something through one of these links, we may earn an affiliate commission.