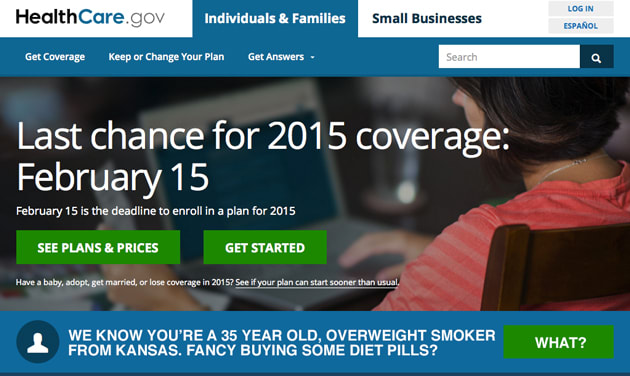 Enabling millions of people to access vital healthcare services they otherwise couldn't have afforded is a very noble cause, but it looks as if those behind the service haven't been playing fair with your private information. A report by the AP has revealed that Healthcare.gov, the Government's affordable care portal, shares some of your personal data with a whole raft of marketing agencies. The action has been independently verified by the Electronic Frontier Foundation, which has found that a person's location, annual income and smoking habits are all being freely distributed.

The foundation has also discovered that enabling Do Not Track doesn't protect users against the surveillance, since the data is being shared in the site's referrer header. In essence, the referrer header is a fundamental part of how the internet works, and can't be anonymized. That's why it's a little unnerving to see a string displaying a person's vital statistics in a format that's very easy to read. In the EFF's example (pictured), this URL was sent to Google's advertising service, DoubleClick, and shows that the user is a 40-year-old smoker living in Arizona and with an annual income of $35,000.

According to the AP, the White House has already responded to complaints, saying that the data sharing was intended to improve the customer experience for the site. It added that firms weren't able to collect this data to "further their own business interests." Given that last night's State of the Union covered a presidential pledge to protect the data of US citizens, it looks as if President Obama has some work to do in his own back yard.
Via: EFF
Source: AP
In this article: Advertising, Do Not Track, DoubleClick, EFF, Healthcare.gov, Privacy
All products recommended by Engadget are selected by our editorial team, independent of our parent company. Some of our stories include affiliate links. If you buy something through one of these links, we may earn an affiliate commission.