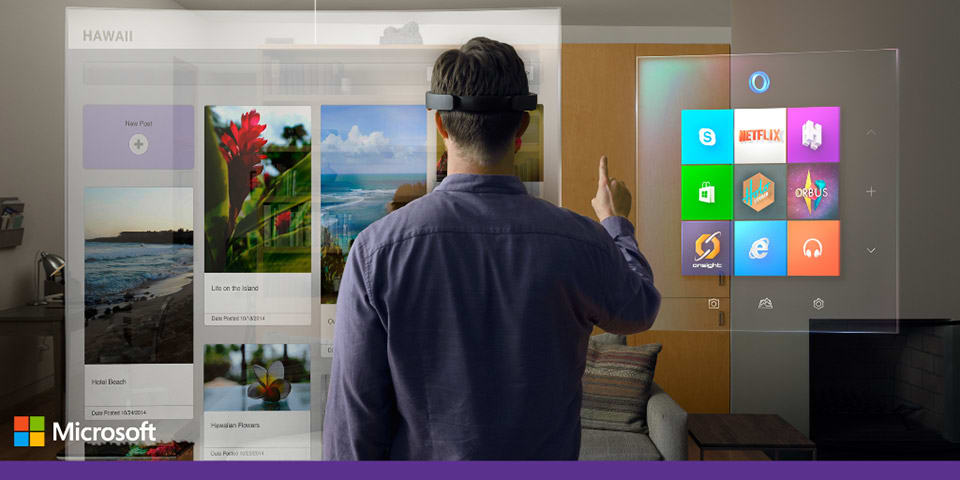 Microsoft's "dreaming beyond virtual worlds." Meaning, it's looking into holograms for, well, Windows Holographic. It looks an awful lot like an extension of the RoomAlive tech we've seen previously, but it isn't limited to gaming. According to Redmond's Alex Kipman, Holographic applications are Windows 10 universal apps so developers will be able to release them across a wide range of devices. The platform works in concert with the newly unveiled HoloLens headset that allows interaction between the physical and digital worlds. The outfit showed this all off with a live demo of an app dubbed HoloStudio wherein an employee built a quadrocopter onstage by pointing her finger and issuing voice commands like "mirror" and "copy." It all seemed pretty natural, actually. Kipman likened it to "print preview for 3D printing" and then pulled a 3D-printed version of the UFO-like quadrocopter seemingly out of his back pocket to show that it's more than just a concept -- it's a reality. The tech is a result of a partnership with a company that "literally specializes in moonshots." Specifically? NASA's Jet Propulsion Laboratory. Kipman promised that everyone in attendance would get to try Holographic and HoloLens today, so check back later for our impressions. Until then, peep the video below.

In this article: gaming, hd, hdpostcross, hololens, microsoft, mobilepostcross, windows10, windows10event2015, windowsholographic
All products recommended by Engadget are selected by our editorial team, independent of our parent company. Some of our stories include affiliate links. If you buy something through one of these links, we may earn an affiliate commission.