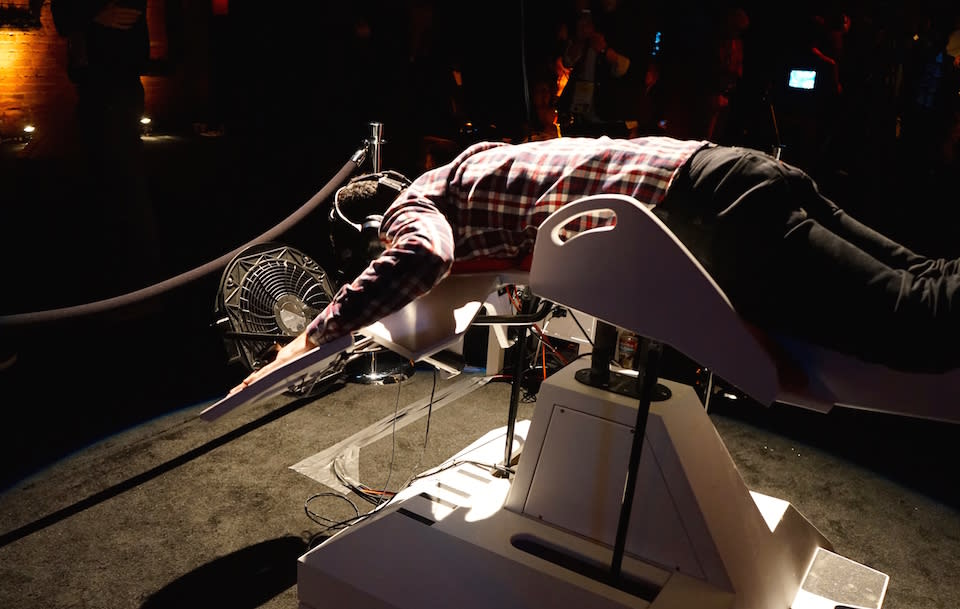 "People dream about flying." That's what Max Rheiner, creator of Birdly, a virtual reality experience that lets you feel what it's like to fly as a bird from a first-person perspective, said about the inspiration for his project. Rheiner, who's head of the masters program in interaction at the Zurich University of the Arts, is showcasing Birdly at Sundance 2015, as part of the festival's New Frontier exhibit, which brings creators utilizing unusual mediums to express their narratives under one roof, each with a different story to tell. In Birdly's case, that medium would be an Oculus Rift headset paired alongside a plastic surface (think of it as an inverted dentist chair) and a fan for the wind effect, creating an embodiment that's meant to spawn a full-body VR experience. As someone who is terrified of heights, the mere thought of trying Birdly was a challenge for me. But, I wasn't about to let one of my greatest fears keep me from having wings and spreading them any way I wanted. "Hey, you know it's not real, right?" you ask. Well, it sure felt like it was during the two minutes that I was airborne, fully immersed in a bird's body and flying freely over beautiful San Francisco. The Bay Area city was mapped out using computer-generated 3D data, provided by a company called PLW Modelworks, so there was no live filming involved. It is San Francisco through and through.

With Birdly, you navigate with your arms and hands; flapping the wings slowly (not like a chicken) helps you gain altitude, while the Oculus Rift, namely a DK2, takes care of giving you a bird's-eye view of your surroundings. Skyscrapers, streets and parks are among some of the things easily visible from above -- and the sky too, of course. Much to my dismay, I made a big mistake early on. Right after starting Birdly, I looked down and immediately felt my stomach turn upside-down. It felt so real I almost wanted to take off the headset, get my body off of the custom surface and call it a day. That's not a knock to the Birdly flight simulator, however, but rather praise. I've never been part of the crowd that gets "sick" from VR, which certainly wasn't the case here. On the contrary, the Birdly experience is beautiful and extremely vivid. It is also the first one in which I felt like my whole body had been transported into the world I was in at that moment. And it all clicked when I turned my head to the side and saw my wings, covered in brown and black feathers.

But what I felt will likely be different from anyone else who tries it, and that's the whole point behind Birdly, according to Rheiner. "Everyone dreams [of flying] differently," he says. "You have to get into the illusion. That's what this is about." Rheiner points out that it was important to come up with an idea that immersed the body completely in VR, not just portions of it. "This project captured me because flying is so nurturing and I wanted to engage the whole body in virtual reality," he added. "We needed a frame of reference, and that's where the dreams come in. People have different opinions about how they fly."

While Birdly has been in the works since last year, it's come a long way since it was demonstrated in Switzerland back in May of 2014. Rheiner says the Birdly being displayed here at Sundance is version 2.0 -- the white-and-red compartment where your body is placed, for instance, wasn't there before. Next up, he hopes to make an industrial version of his flight simulator, with improved parts rather than those that were built in-house, at the Zurich University of the Arts.

In this article: Birdly, hands-on, Oculus, OculusRift, Sundance, Sundance 2015, Sundance2015, VirtualReality, VR
All products recommended by Engadget are selected by our editorial team, independent of our parent company. Some of our stories include affiliate links. If you buy something through one of these links, we may earn an affiliate commission.