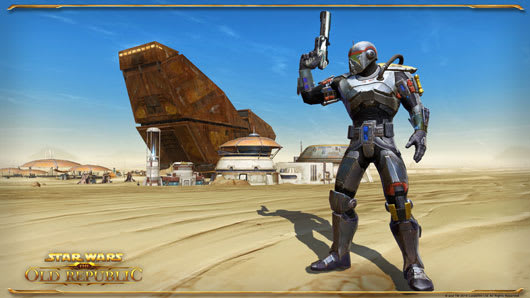 When Eric Musco, the Star Wars: The Old Republic community manager, took the stage at the Community cantina last night at PAX South, he revealed that in 2015 the team wants to do something a bit different with this and future cantina crawl events. In the past, it has been policy not to reveal anything at the cantinas; they were intended to be social events where players could get some face-time with the developers of the game that they both enjoyed. However, going forward, the community and development teams have decided that each cantina will reveal that had not been mentioned before.

The reveal at this weekend's cantina came in the form of the yet-to-be-published producer's letter by Bruce Maclean. The completely made-up story is that it was stolen from his computer while he wasn't looking and printed out to share with us at the cantina.

After the break, you'll find a copy of that letter as it was dictated to cantina goers. The caveat, of course, is that this is not the final version of the letter that will appear on the official site in two weeks, so everything is subject to change.

For many, the start of the year is a time for setting goals and planning for the future. This is something we've been focusing on here at BioWare Austin. 2014 was an amazing year for the team. We delivered two expansions, an overhaul to the class system, and regular story updates through flashpoints. I'm proud of the what the team has accomplished, and we not have been able to do it without your support. Thank you.

I'm excited about what we have in store for you in 2015. Some of you might remember before launch, we talked about the four pillars of RPGs: combat, progression, exploration, and story. SWTOR is an MMO, but it's also a BioWare game. Three years ago we set out to deliver a product that delivered the best of two worlds: the immersive story experience of a single player RPG and the vast array of systems and social connections from an online multiplayer game. Since launch we mainly focused on the latter, adding galactic stronghold, achievements, legacy perks, reputation tracks, and galactic starfighter. But with the success of the Shadow of Revan expansion, we think it's time to return to our roots and what truly makes our game unique: story.

Shadow of Revan was just the beginning. In 2015, we are committed to bring you more character driven adventures in the Old Republic universe. You're going to see a unified story with themes that unite our eight classes. Everyone is a veteran from the galactic civil war with a complicated past and uncertain future. You'll see a greater emphasis on your character's personal story and on the choices that you make. I don't want to say too much more since we're in the midst of development, but what we have planned really gets back to the Star Wars fantasy at the heart of our game.

Our plan is to deliver two major updates with this new story direction later this year. On in the summer and other by the end of the year. "But what's happening in the meantime?" you might ask. Below is a list of what you can expect in the first half of the year. As always, please keep in mind that all of this is subject to change. We reserve the right to adjust our plans if we feel it is necessary.

For April 28th, which is our current tentative date for game update 3.2, we have a new system called the outfit designer. Stay tune for a blog of this awesome new feature coming soon!

A new story arc on the planet Ziost. This story arc takes us to the Imperial homeworld of Ziost, where we answer many of the questions posed by the cliffhanger at the end of Shadow of Revan.

It also have the end of PvP season four and the start of season five.

Beyond that, we would like to, this year, do a new stronghold. In addition to that also add a new playable race: the Togruta. I kind of let the cat out of the bag on this one last year that the New York cantina, but now it's in writing or on the interwebs via my voice.

This still more to be revealed for SWTOR this year. This is just the start. When we are further along in development, we'll release more information that dives into the nitty gritty details of these new features.

I want to thank you, our galactic heroes, for continuing to support us. It's your feedback and enthusiasm that makes SWTOR a better game and drives us to be better. All of our hard work is for you. May the Force be with you

If you pull apart this letter, there is certainly more than one reveal, but fans are also noticing things that are missing. For instance, there is no mention of PvP beyond the seasons. Of course, fans expect continued class balance, but we haven't heard heard anything about a new game type or map. Even though a player asked that that specific question in the Q&A section of the event, the developers were just not able to say anything really about that other than to ask what kind of maps or gameplay types the audience would like.

Galactic Starfighter fans also noticed the snub of their favorite part of the game. Space PvP seems to have been made, launched, then forgotten about. And at the last cantina, BioWare specifically said that there was nothing on the agenda regarding that part of the game.

However, the bright side of this night was that the developers were able to connect with the fans. With BioWare being located only an hour or so away from the convention center, many of the devs -- even the ones who didn't ascend to the stage -- made it to the cantina and were able to show just how excited they were with game as it is and where it is going.

Massively's on the ground in San Antonio during the weekend of January 23rd to January 25th, bringing you all the best news from PAX South 2015. Whether you're dying to know more about Guild Wars 2's Heart of Thorns, hoping to catch a glimpse of Elite: Dangerous on the Oculus Rift, or angling for some rumors from the SWTOR cantina crawl, you can bet we'll have it covered!
In this article: bioware, bruce-maclean, community-cantina-tour, con, convention, ea, electronic-arts, eric-musco, event, event-coverage, events, expo, f2p, featured, free-to-play, lucasarts, massively-event-coverage, pax, pax-2015, pax-south, pax-south-2015, penny-arcade-expo, producers-letter, sci-fi, star-wars, star-wars-the-old-republic, swtor, the-old-republic, tor
All products recommended by Engadget are selected by our editorial team, independent of our parent company. Some of our stories include affiliate links. If you buy something through one of these links, we may earn an affiliate commission.