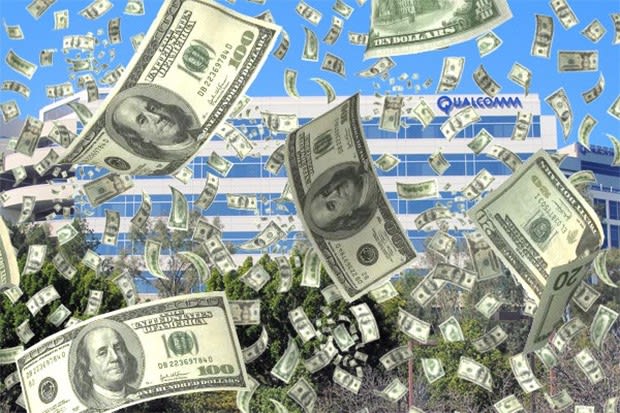 Qualcomm's presence inside many of the world's most popular mobile devices over the last few years has kept the money coming in (creating the need for the picture shown above), but today there was some bad news. In its Q4 earnings release, the company revealed (PDF) "Expectations that our Snapdragon 810 processor will not be in the upcoming design cycle of a large customer's flagship device." Uh-oh. Even though it didn't say who the large customer is, for years there have been expectations that Samsung would eventually stop relying on Qualcomm chips to run many of its Galaxy phones.

This would appear to line up with rumors from Bloomberg last week that claim Samsung will use one of its own Exynos CPUs in the next Galaxy S because the Snapdragon 810 overheated in testing. Of course, it's not all bad news -- even the revised profit estimates are only down to between $28 and $26 billion, compared to $28.8 and $26.8 billion, and LG has already confirmed plans to use the 810 in its upcoming G Flex 2. On an earnings call today with analysts CEO Steve Mollenkopf brushed off the overheating claim, saying the part works as expected.

Source: Qualcomm Q4 2014 earnings (PDF)
Coverage: Bloomberg, Reuters, Recode
In this article: exynos, GalaxyS, GalaxyS6, mobilepostcross, qualcomm, samsung, snapdragon
All products recommended by Engadget are selected by our editorial team, independent of our parent company. Some of our stories include affiliate links. If you buy something through one of these links, we may earn an affiliate commission.