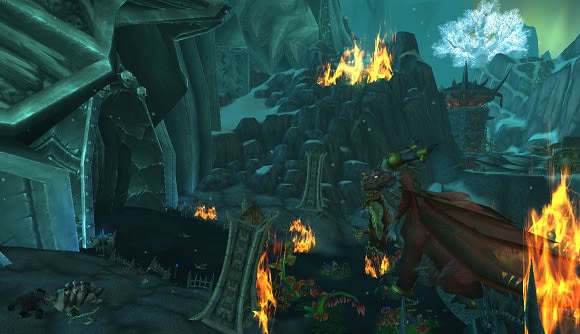 Reflecting back on 10 years of WoW, I find it hard not to smile and shake my head in disbelief. If someone had told me early in 2004 that a game would be released that year and I'd still be playing it week in, week out in 2015, I never would have believed it.

If you missed part 1, I covered world PvP near Uldaman, founding a guild, getting lost in Gnomeregan, earning my Rhok'delar bow, and my first night in Outland. Here are five more amazing moments.

6. The Wrathgate. In the weeks after Wrath of the Lich King launched, one achievement got instant attention in your guild chat: Veteran of the Wrathgate. Those who had already experienced the awesomeness congratulated the player who earned it. Those who hadn't waited in anticipation of that moment (and hopefully remained unspoiled until they did). And those who had just earned the achievement were left saying, simply, "whoa."

It's a quest line that deserves its own Archivist column someday, so I won't go into detail about the lead-up to this incredible event. Once you completed it, the cinematic began.

Going into it, we thought we knew what Wrath was all about. We thought it would be straightforward: The Lich King attacked us, so the Horde and Alliance would put aside their differences to take him down. No mess, no fuss. Four and a half minutes later, the champion of each faction was (apparently) dead, the Forsaken were in open rebellion, everything was on fire, and we realized that this story would be far messier and more interesting than we thought.

Afterward, we gazed over the charred remains on the battlefield and listened to the screams of the dying, shellshocked from this devastating moment. It was over, or so it seemed. But Blizzard had another surprise in store for us a few quests later: the Battle for the Undercity.

Undercity was no longer the grim but peaceful faction capital we'd come to know. Using the new phasing technology, Blizzard had transformed it into a war zone. We fought beside our faction's heroes. We claimed the city one district at a time. And at the end, we confronted both the traitors and the leaders of the enemy faction.

With the Wrathgate, Blizzard took a giant leap forward in storytelling. It was Blizzard's way of saying, "We can tell stories in this game beyond quest text and readable books tucked away in lonely corners of the world. We can put it right in front of you." WoW has never been the same since. 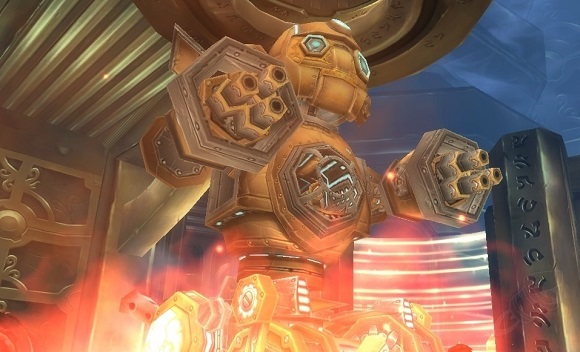 7. Becoming a Firefighter. Ulduar vastly expanded on the idea first implemented in the Obsidian Sanctum. It's been called "heroic" and now "mythic," but in 2009 we just called it "hard mode." Ulduar had one for most of its 14 bosses. They weren't a toggle back then -- they were fight-specific and tied more to the achievement system than the UI. No hard mode in Ulduar, however, combined both the pure fun and the crazy difficulty of Mimiron's Firefighter achievement.

The toggle itself was hilarious: a giant red button in the back of Mimiron's room with a sign that says "DO NOT PUSH THIS BUTTON." Engaging it started the fight -- along with a self-destruction countdown that would wipe the raid if it finished.

The fight itself was difficult enough, with three completely different phases, followed by a fourth phase combining the hazards of the first three. Then factor in the hard mode self-destruct fire that chased you around the room and had to be managed at all times.

The fight, like the best of Blizzard's encounter designs, was an exercise in controlled chaos. You're running from fire, plasma, mines, rockets, bombs, and lasers. You're fighting a tank, a turret, and a robot head. You're using the magnets you loot from enemies to bring Mimiron's flying head to the ground. Then at the end you're dealing with almost all of that all at once, and balancing your DPS on the three pieces at the same time.

Now imagine this all happening while you've got a placidly calm voice counting down to your imminent doom if you don't kill him fast enough.

Beating this encounter took my guild weeks -- and we only did it on 10-player. We came close to giving up after a few of the rougher nights. We had to look at every raid member and figure out what he or she could do better. When V0-L7R-0N finally sagged down, defeated, it felt like we had done the impossible.

Yes, Yogg was probably a bit harder, but Mimiron was more fun. 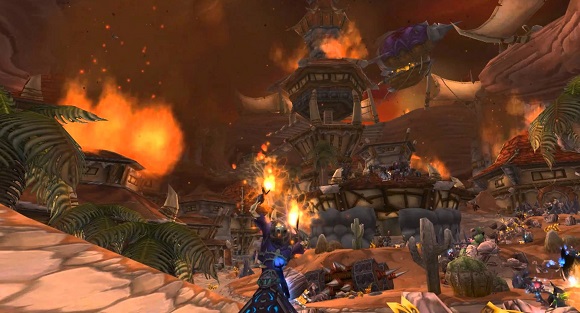 8. Orgrimmar burns. In an old WoW Archivist I talked about when Blizzard "hated" the Horde. Part of the perception that Blizzard hated our faction came from the vast discrepancy between the designs of Orgrimmar and Stormwind, or even Ironforge. The original version of Orgrimmar was a sad, lifeless shambles compared to the grand and bustling Alliance cities in the Eastern Kingdoms. So much love and care was obviously put into those cities. The Horde's capital felt like an afterthought.

Then the Twilight's Hammer burned Orgrimmar to the ground with fire elementals. I was ecstatic. Even as I fought against the elementals, I loved watching the city burn. I knew it meant a new Orgrimmar for 4.0.

Sure, the repetitive invasions of the pre-Cataclysm event grew tiresome after a while, especially for low-level players who couldn't participate and had to flee from the cities. The first time you experienced them, though, it felt dynamic and exciting.

I couldn't wait to see what Blizzard would give us for Orgrimmar 2.0. The new version is a huge step up, a worthy companion to Stormwind. And with more Unnecessary Spikes than ever.

Stormwind also got busted up in Cataclysm, but apparently the Alliance aren't very good at rebuilding things. It's almost like they refused to pay their stonemasons or something. But that would be silly. 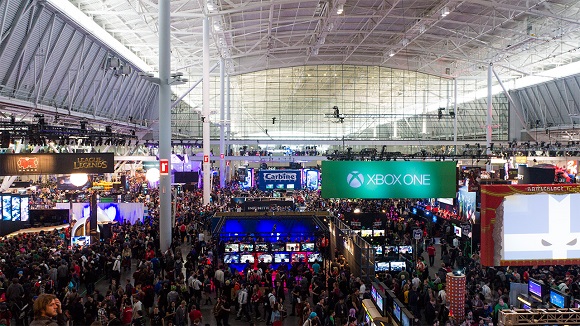 9. Interviewing Blizzard bigwigs at PAX East. Last year I bought tickets for me and a friend to attend PAX East 2014. I went to the very first PAX East and had such a great time that I wanted to go back, even though I no longer lived in Boston. I told Alex Ziebart that I was going, in case he wanted me to check out the Warlords demo and write up an article about the build.

Alex told me to report to Blizzard's press room at the event and they'd pencil me in for some demo time. When I arrived, they told me they were pretty booked up, but they could give me 10 minutes. I wasn't sure how much I could really glean in that much playtime, but I said I'd come back for my scheduled appointment anyway.

At the appointed time, I was ushered into a small demo room within Blizzard's press room -- except it wasn't just me and a computer like I thought. The room was full of Blizzard staff, including senior designers Brian Holinka and Steve Burke and technical designer Kris Zierhut. This wasn't only a demo, I realized. There had been a miscommunication somewhere.

This was an interview.

I've been interviewed several times about my work on WoW Insider, but I hadn't conducted a real interview since my part-time job at the Eastern Pennsylvania Business Journal as a college senior. I didn't trust my phone to record since I hadn't tested it, and I only had 10 minutes.

I'd stumbled into a fantastic opportunity, however, so I wasn't going to let that slow me down. I pulled out a notepad and a pen and began to furiously write down quotes and impressions as we talked about the game. It was a lot of fun to talk face to face about WoW with the guys who make it. We're all passionate about the game and we had a great conversation.

I walked out with a cramped hand, a notebook full of incredibly sloppy handwriting, and some new information about the expansion that I hadn't seen reported anywhere else yet. Despite the complete lack of notice or preparation, I consider that interview a success! 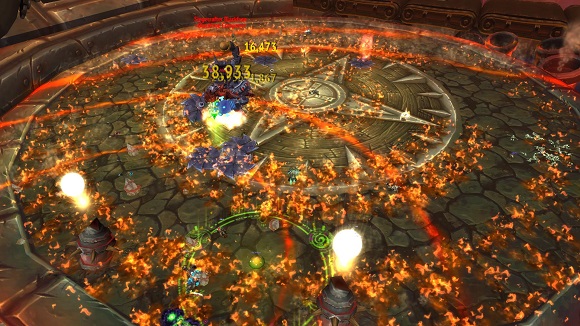 10. Defusing Heroic Siegecrafter. Why is it always the mechanical ones? Heroic Blackfuse reminded me of hard mode Mimiron in many ways, with lasers, missiles, mines, magnets, and the absolutely insane amount of fire on the ground. But Siegecrafter's bombs had two bombs inside. And apparently his first name is Helix. Who knew?

I play a feral druid, so I was assigned to the conveyor belts. The belts were fun at first, with any mistake leading to your death and a raid wipe. Everyone laughed that you got instagibbed and we tried again. Then as we approached and exceeded 100 pulls, it wasn't funny anymore. Over time, I mastered those belts and rarely died. But the stress of knowing any misstep will doom your team never really goes away.

We tried several different strategies. 200 pulls came and went. I could practically do the belts blindfolded now. We weren't resetting anymore, so for weeks, that was my only purpose in WoW. To find that one ideal path through each set of deadly, deadly lasers. To scratch and gnaw on machines till they fell apart.

We hit the depressing 300 milestone. These are the times when teams break, when guilds collapse into infighting and finger-pointing. We soldiered on. No one broke. When we finally downed H Siegecrafter, it was a glorious, hard-won moment.

We also managed Heroic Paragons, which was a surprisingly fun encounter, but Blackfuse stalled us for so long that Warlords launched before we managed to start working on Heroic Garry. It was a bummer, but we felt a lot better heading into the expansion knowing that Blackfuse hadn't evaporated our guild.

I've written about other amazing moments in other WoW Archivist columns, such as my first weeks in Azeroth, massive battles at the Crossroads and in Hillsbrad, summoning the Ice Lord in Alterac Valley, an anniversary assassination of Jaina Proudmoore, and the zombie plague event. I could easily expand this list to a hundred moments, or two hundred. Simply put, no other game I've ever played has provided so many. Here's hoping for a hundred more over the next 10 years!