Would you put a gas-powered iPhone charger in your pocket? 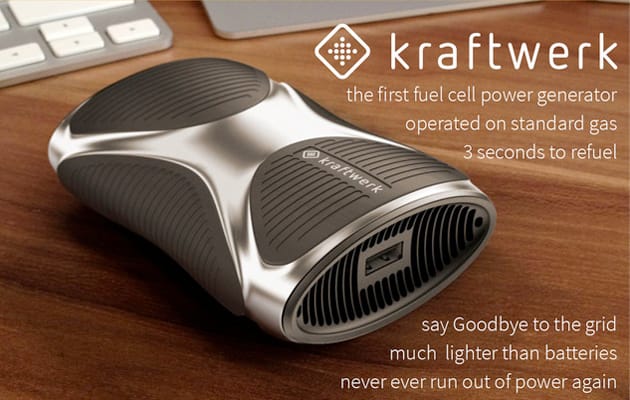 Batteries are expensive, so it makes sense that device makers are in no hurry to cram in more capacity than is actually necessary. The downside of this, of course, is that if you're out and about, the responsibility of keeping your hardware fully charged is yours alone. Most people overcome this, either by attaching themselves to any available wall socket or keeping a rechargeable power pack in their bag. eZelleron, however, is hoping that people will want to carry a small gas-powered generator in their pockets instead.

The hardware is called Kraftwerk, after the german for "power station," rather than the pioneering electronica band of the same name. All a user has to do is squirt in a measure of lighter fuel or camping gas, and the company claims you'll be able to refill an iPhone 11 times over. eZelleron is making some big claims about the efficacy, efficiency and safety of its new product, saying that it'll be safe to stash in your pocket and will even be allowed into an aircraft cabin. The Kickstarter pitch is light on most of the serious details, but seeing as the company has already destroyed its initial $500,000 goal, we can expect to see more when this launches in December. Of course, if you want to get in ahead of the queue, you can still pledge $99 to get a unit by February of 2016.

Via: Slashgear
Source: Kickstarter
In this article: eZelleron, Kickstarter, Kraftwerk, No not the band, Seriously not the band, video
All products recommended by Engadget are selected by our editorial team, independent of our parent company. Some of our stories include affiliate links. If you buy something through one of these links, we may earn an affiliate commission.