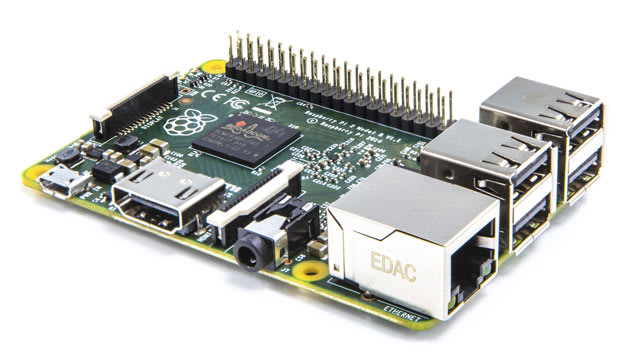 While Raspberry Pi fans were told to expect a brand new board somewhere around 2017, it turns out that wasn't quite true. This is the Raspberry Pi 2 Model B: a substantial upgrade from the Model B+ that will go on sale later today for $35/£25. The new board has some fundamental upgrades that could well warrant the upgrade for existing Raspberry Pi dabblers -- that is, if smaller wasn't better. Raspberry Pi Foundation lead Eben Upton told The Register that the new Model B "is a usable PC now." A fact borne out by official support for Windows 10.

"You could use a Raspberry Pi 1 as a PC but you had to say 'this is a great PC in so far as it cost me 35 bucks'. We've removed the caveat that you had to be a bit forgiving with it. Now it's just good."

How much better? Well, the team's upgraded the processor on-board to a 900MHz quad-core chip and have loaded in 1GB of RAM, which the foundation reckons will offer at least six times the performance of the old Model B+. It may look the same, but the board (with that processor which has apparently been in development for years), also has a special a tweak connecting to the quad-core brains to ensure it handles the gig of RAM on board. Naturally, it'll be up to the Raspberry Pi community and makers to show what is possible with this sequel PC -- but we're assuming the specification bump will mean "a whole lot more". Older boards will likely get cheaper over time, but the Raspberry Pi 2 will still go on sale for the same price as last year's B+; $35/£25. Just like its predecessor, at launch, it's only available via a limited number of partner outlets on either side of the Atlantic.

Via: The Register
Source: Raspberry Pi
In this article: micropc, modelb, pc, RaspberryPi, RaspberryPi2, raspberrypi2modelb
All products recommended by Engadget are selected by our editorial team, independent of our parent company. Some of our stories include affiliate links. If you buy something through one of these links, we may earn an affiliate commission.