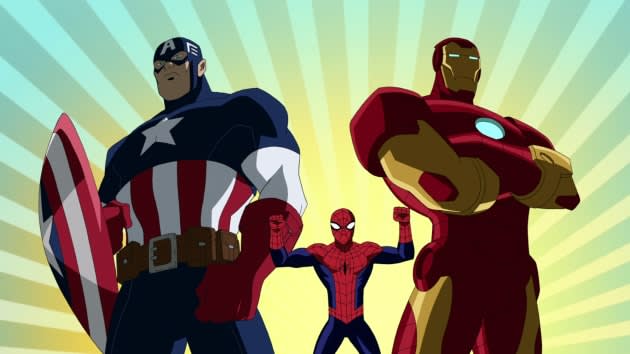 You can add a few more entries to the long list of comic book movies due in the next few years, as Sony Pictures has revealed its plans for the Spider-Man franchise. As suggested in emails leaked during the recent hacking scandal, the studio has worked out an agreement with Marvel and Disney to include Spidey in the Marvel Cinematic Universe which already includes a slew of blockbuster movies, a couple of TV shows and even Netflix's upcoming series. The superhero/photojournalist will appear in an upcoming MCU movie first, then on June 28th, 2017 a standalone flick is coming that's produced by Sony, departing executive Amy Pascal and Marvel Studios president Kevin Feige. According to The Hollywood Reporter, the Marvel movie with Spider-Man could be Captain America: Civil War, while Andrew Garfield will not continue on in the role.

Sony is keeping its exclusive rights to "finance, distribute, own and have final creative control of" Spider-Man flicks, but now it can dip into the popularity of the MCU series and what Marvel has achieved there (other Marvel characters can also cross into the Spider-Man series now), while fans can finally see the character pop up in stories on the big screen the same way he has in the comics.

There is some bad news though, if you've been waiting on a few of the other Marvel flicks already announced then you should know that some have the dates have shifted: Thor: Ragnarok has moved from July 28th, 2017 to November 3rd, Black Panther moved from November 3rd to July 6th, 2018, Captain Marvel from July 6th, 2018 to November 2nd, and finally Inhumans moved from November 2nd, 2018 to July 12th, 2019. At least for now, Avengers: Infinity War Parts 1 & 2 are staying at their previously scheduled release dates of May 4th, 2018 and May 3rd, 2019. Now, if someone could just put a call in to Fox about the X-Men franchise we could get this whole thing wrapped up nicely before the next Olympics.

Source: Marvel (1), (2)
Coverage: The Daily Beast, Deadline, Marvel Cinematic Universe (Wikipedia), The Hollywood Reporter, Variety
In this article: breaking news, disney, hdpostcross, marvel, Marvel Cinematic Universe, mcu, sonypictures, spider-man
All products recommended by Engadget are selected by our editorial team, independent of our parent company. Some of our stories include affiliate links. If you buy something through one of these links, we may earn an affiliate commission.