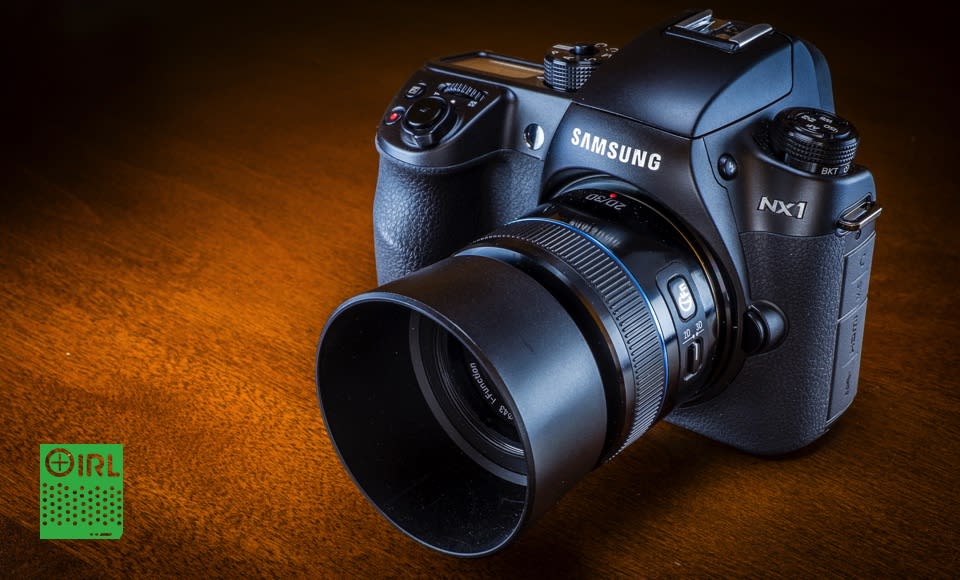 While companies like Sony and Fujifilm continue to stuff serious camera guts into smaller and smaller mirrorless bodies, Samsung's aiming to ape both the function and the form of modern "prosumer" DSLR's with its $1,500 NX1. With a rapid-fire 15 fps burst mode and 4K video support, the company's flagship interchangeable lens camera certainly boasts some high-end specs. I spent a month with Samsung's latest to see if it can match or even exceed the DSLRs it appears to emulate.

In terms of appearance and build quality, the NX1 most closely mimics the advanced consumer, or prosumer, models offered by Canon and Nikon -- the 70Ds and D7100s of the world. Its magnesium body, robust grip and distinct viewfinder hump definitely suggest a traditional DSLR at first glance. Put the NX1's viewfinder up to your eye, however, and you'll spot a rather capable, 2,360-dot electronic viewfinder rather than the optical variety. Under most circumstances, the EVF's frame rate is rock solid, though I did notice it stutter a bit while trying to lock focus in poor lighting conditions. Elsewhere on the body, you'll find a fair number of controls, including a handy locking mode dial. The overall layout feels comfortable, though the movie record button seemed out of place to the right of the shutter/power toggle. And the ring of buttons atop the drive mode dial are a bit too tiny to easily find without looking.

The NX1 also boasts a 3-inch touchscreen on the back that responds well to swipes and gestures like two-finger zooming. It's a flip-out deal, so low- and high-angle shooting should be a breeze, but it doesn't flip to the side or forward for selfies like, say, Canon's 70D. Colors are well-saturated on the Super AMOLED screen, though they don't always reflect reality. On a cloudy, overcast day inside the Seattle Seahawks training facility, the artificial grass of the team's practice field came across as vividly green on the display, but it was much more muted in person. Hopefully, though, if you're investing this much in a camera system, you're also examining your pics on a more accurate (possibly calibrated) external screen as much as possible. 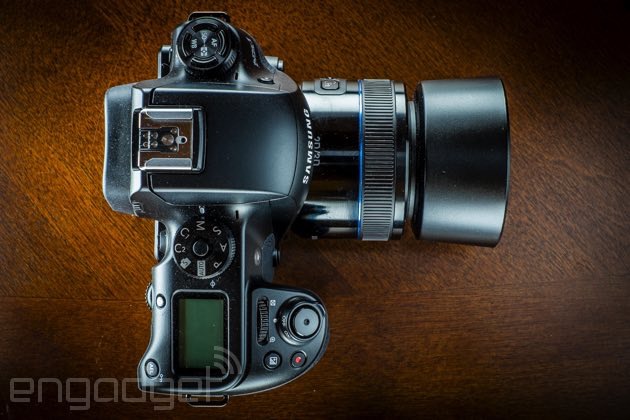 Still-image quality is generally quite high and noise levels weren't much of an issue up to about ISO 6400. When you get much higher, though, the noise tends to creep in a bit too much for my liking. I wouldn't use the standard top-end ISO of 25,600 unless I had no other options; checking a box in the menu unlocks ISO 51,200, but it's grainy (no surprise there). At more sane levels, there's not much to complain about from a speed or quality standpoint. The fast burst mode and solid AF performance mean you won't miss many shots because of your gear. Its hybrid autofocus system includes 205 phase-detection points and its max shutter speed of 1/8000 is plenty quick. The NX1's auto white balance also performed well, though it tended to have a tougher time than, say, my Fujifilm X-E2 when it came to yellowish street lighting.

Samsung's also touting the NX1's video chops, which include up to 4K (4,096 x 2,160 or 3,840 x 2,160) recording at 30/25/24 fps. If all you need is ho-hum 1080p, you can choose up to 60 frames per second. The camera supports the newer, more efficient H.265 video codec and an included app will quickly convert that video to the older H.264 standard if your editing suite of choice doesn't yet handle the new format. Overall, video quality is quite good, with sharp details in the feathers of a hungry hummingbird, though I did spot a vague hint of compression artifacts in particularly dark sections of the frame. I could see rolling-shutter effects if I panned around like a crazy person, but under normal filming circumstances, I don't think it poses much of a problem.

The NX1 also features a deep set of wireless capabilities, including WiFi, NFC and Bluetooth. I was able to easily pair my iPad to the camera using the Samsung Camera Manager app. With the link established, I could remotely snap pics of hummingbirds in our backyard thanks to the app's live viewfinder and onscreen controls. 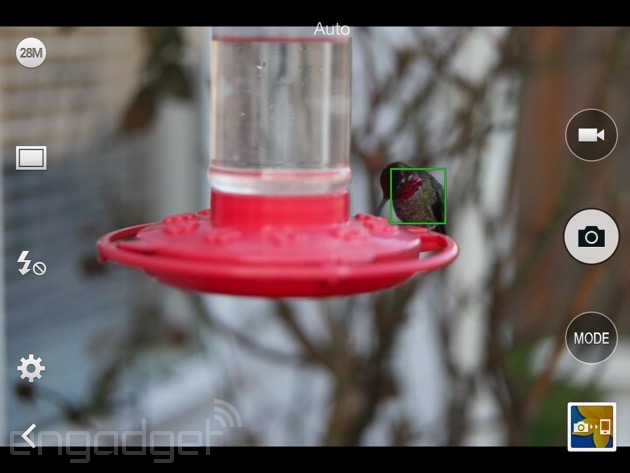 My time with the NX1 was spent using Samsung's 45mm f/1.8 lens. It's a pretty standard optic, save for a trick 3D mode that activates an internal shutter, presenting the image sensor with two slightly offset perspectives in a single shot. The effect works in both stills and movie modes. I took a quick sample video in 3D mode and asked our own Jose Andrade to check out the results on his Panasonic 3D TV. The first clip (recorded at the highest setting) showed great picture quality, but playback was quite choppy on his set. A second clip, captured at a lower bit rate, played flawlessly, however. If you're taking still images in 3D mode, the NX1 saves both a standard JPEG and MPO (Multi-Picture Object) formats for viewing.

Overall, Samsung's made a pretty potent mirrorless shooter in the NX1. There's not too much to complain about in either stills or movie mode, though editing video will require a middleman conversion until H.265 becomes more widely supported. The biggest question is whether Samsung's lens offerings meet your needs -- a solid camera body is nothing without good glass. If the performance and solid build have you curious, take a look at the lens lineup and see if the ranges and specs you need are there. At $1,500 for the body only, this is an investment, after all.

To view some full-resolution shots from the Samsung NX1, click here.

In this article: 3D, engadgetirl, MirrorLess, MirrorlessCamera, NX1, Samsung, Samsung NX1, uk-feature
All products recommended by Engadget are selected by our editorial team, independent of our parent company. Some of our stories include affiliate links. If you buy something through one of these links, we may earn an affiliate commission.