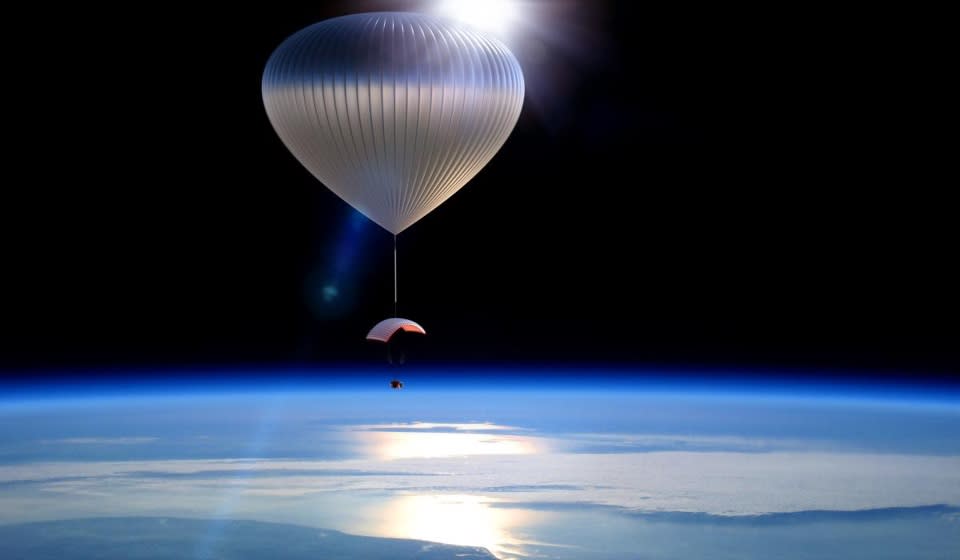 Jane Poynter wants you to take a trip to space that's as comfortable as a luxury cruise. She's spent two years living in the sealed research lab Biosphere 2, and serves as president of Paragon Space Development Corporation, where she led development of the life-support systems for the 2018 Inspiration Mars mission. Now, as CEO of World View, she's been developing a solution for space tourism that relies on a huge helium balloon, not rockets. That means no training necessary, no dealing with the uncomfortable effects of heavy G-force acceleration and a trip that lasts four to six hours. The balloon takes six passengers (along with two crew members) up 20 miles in a capsule -- high enough that you can see the curvature of the Earth, but 40 miles below sub-orbital space. And while tickets are expensive at $75,000 a pop, they're still significantly cheaper than alternatives like Virgin Galactic, which will run you $250,000.

Below, check out our conversation with Poynter about World View's progress so far, and her dream of making everyone realize we're all traveling together on a spaceship called Earth.

What got you interested in this particular angle for space tourism? We haven't seen anyone tackle something like this before.

That's one of the reasons it's so interesting! I've been involved in commercial spaceflight in some form or another for my entire career. In all of that time, we've been talking about how do we make space really accessible to people ... While rocket flight is incredible, and it'll take people to places in the solar system, balloon flight affords so much comfort. It's gentler and it's safer. It opens the door to so many more people being able to go to space than I believe is really possible with rockets.

How long have you been working on it?

We've been working on it for a couple of years. You probably saw that last year our team finalized the StratEx space jump with Alan Eustace [Google's SVP of Knowledge]. Now we've taken that team and that technology and put it all into World View.

Can you elaborate on the space jump? How close is that to what you're going to be doing?

A lot of it is close. For us, it was exciting having the opportunity to do that with Alan; it was sort of a dream come true. We got to be involved in this historic jump that Alan was doing, but we also got to develop a lot of the technologies that we needed for World View. The balloon technology is essentially the same that we're going to be using for the capsule. We got to learn a lot about the avionics, the communications, the trajectories, the meteorology, as well how the parafoils [the giant parachute used by the capsule] fly ... We got to develop a much safer launching system than is typically used for launching balloons.

Now, there are details that are going to be different, and of course, we didn't fly the capsule. But a lot of it, from the launch all the way to the landing, is the same. The mission control is similar; the software is similar. There's an enormous amount of transfer. We're anticipating somewhere around the end of the year that we want to have the full-scale systems flying. It won't have the capsule on the bottom; it'll be unmanned, but we're hoping to have the whole system up, soups and nuts. We want to get the whole launch getup to float [at] altitude for a while and then come down. It'll be the whole flight profile [the company expects flights to last four to six hours, with around two hours of prime viewing] at full scale, with a full-scale balloon and the full-scale parafoil. That's the next big step for us; meanwhile we're also working on the capsule as we go along.

You go over the main safety concerns on your website, but how are you testing for safety?

The good news is that the technology individually has been around [for a while] and utilized a lot... The balloons have been around for decades, so they're pretty well-understood. The parafoils we're flying, we're doing some innovation around that, but the underlying technology has been around for decades and flown thousands and thousands of times. It's incredibly safe. You can rip out half of the parafoil and the thing still keeps flying normally. They're incredible. We have a backup parafoil system in any event something really bizarre happens. Those are the kind of systems that are used on private, small planes, very effectively.

The spacecraft is a spacecraft, and honestly they've been pretty well tested. [We know how to] develop pressure hulls and how to do life-support systems like this. For someone who's been involved in space a long time, the spacecraft itself is relatively straightforward. What's really novel about it is putting all the different pieces together in a single unit. That comes down to doing flight tests. Put the whole thing together and do a lot of flight tests.

How did your experience in Biosphere 2 [recounted in the popular TED talk above] translate into this project?

Oh, completely ... Biosphere 2 taught me so many things, and one of them is the sort of continuum of Earth and space ... I get a little envious and glassy-eyed talking to astronauts about their experiences of going into space. Many of them talk about it in reverential terms. They go thinking that they're really exploring space -- and while they are doing that, what they really discover is that they're exploring the Earth for the first time from this [far-off] vantage point. Many of them fall in love with planet Earth for the first time. They really get the fact that we do live on this planet in a ball in the vacuum of space and we're all on spaceship Earth together.

When I was inside Biosphere 2, I had exactly the same experience, but from the completely opposite perspective of being embedded in my biosphere. I was reliant on my biosphere (my spaceship Earth, if you will) every moment of every day, and I was very cognizant of that fact ... Biosphere 2 was both a space project and an Earth project. We were a space state on Earth and we were a laboratory for understanding more about the Earth. So it's that that we carry forward into World View. It's about taking people up to explore the majesty of the solar system that we live in, and the universe beyond as you look out to the stars, and then turn around and look back at this extraordinary planet that we live on.

Yeah we do see it coming down eventually ... Obviously that's all of our goal. Every one of these [space tourism] companies has the goal of doing that. It certainly wouldn't be tomorrow, and I wouldn't be surprised if we see the price going up before it comes down. But we definitely want to have it come down ... I want to make this as accessible as possible. But it'll take a little while.

The helium costs alone must be tough to deal with.

Yeah it's helium [and other things] ... Unfortunately, the one thing that's not reusable is the balloon, so we've got a lot of work to do to get the costs down. We've got to get the flight numbers up, because once you do, you sort of get the economies of scale. All of that will help.

A sunrise viewed from a World View test flight

How do you position World View against other space tourism offerings?

We don't really see ourselves in competition with the other rocket-based systems out there because we're such a different experience. We're completely different. Sure we're all going to near space ... but with the rocket flight, you're going to have the experience of high G [-force], acceleration, vibration and lots of training. It's also a very quick trip up and down. For us, it's gentle. It's for those people that really want to savor the experience, that really want to take their families up there. We have families who have bought tickets. That's exactly where we want to go with it -- the family trip to space.

In this article: Jane Poynter, space, space tourism, World View
All products recommended by Engadget are selected by our editorial team, independent of our parent company. Some of our stories include affiliate links. If you buy something through one of these links, we may earn an affiliate commission.