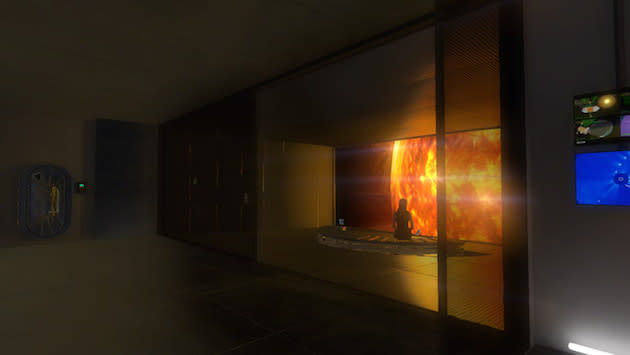 Oculus Rift offers some pretty out of this world experiences (punching sharks and becoming a bird immediately come to mind), but getting an up-close and personal with the sun aren't among them. Until now, of course. That, my friends, is what Sunshine Observation Deck is for. If it looks familiar, that's because it's based off of a set from the 2007 Danny Boyle flick, Sunshine -- you know, the one that heavily influenced the original Dead Space and that's by far one of the best sci-fi flicks from the past ten years. Anyhow, the walkthrough lets you explore the movie's solar observation deck and adjoining science lab, witnessing Sol in its fiery majesty. You can't adjust the intensity of the filter brightness, but given that, you don't need to worry about catching a nasty sunburn, either.

Creator Julian Butler aspires for it to be "one of the more calm" experiences available for the Rift, which means you won't likely be running from a zombie hellbent on stopping your mission to drop a bomb inside the sun at the end. Or will you? Check out the video below for a hint.

In this article: DannyBoyle, hdpostcross, movies, oculus, OculusRift, oculusvr, scifi, sunshine, VirtualReality, vr
All products recommended by Engadget are selected by our editorial team, independent of our parent company. Some of our stories include affiliate links. If you buy something through one of these links, we may earn an affiliate commission.