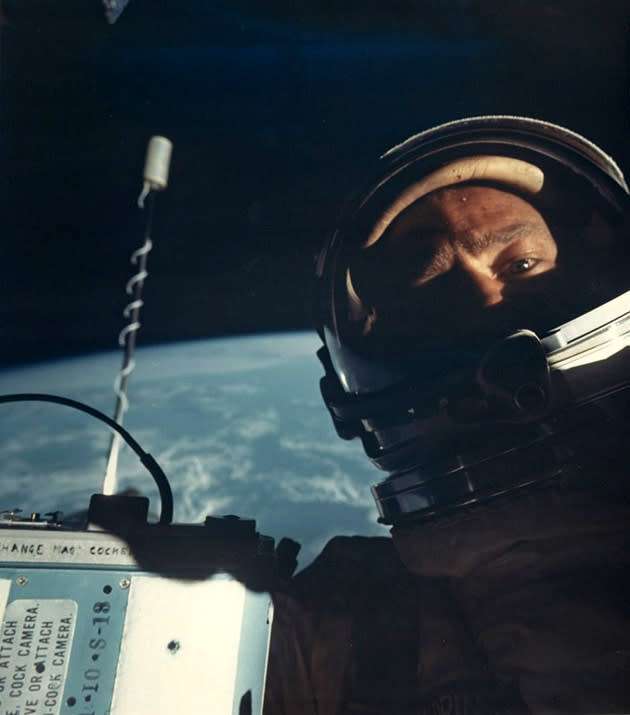 Back in November 1966, Buzz Aldrin took a self-picture that will blow all Caribbean vacation selfies out of the water. Aside from the fact that it doesn't have a duckface in it, the photo was taken in space during the Gemini 12 mission. This historical selfie is but one of the numerous images NASA has recently unearthed from its archives -- images it's slated to auction off at Dreweatts & Bloomsbury's in London's Mayfair sometime today. See, the agency used to release only a small number of images to the media back then, while the rest was sent to Manned Spacecraft Center researchers in Houston.

In addition to Aldrin's "selfie," NASA also found images from the early days of Project Mercury (the USA's first manned spaceflight program) up until the Apollo era. Those include photos taken by the last man to land on the moon and what's now recognized as the only clear photo (without being Photoshopped) of Neil Armstrong on the satellite embedded below. All these photos were taken using Hasselblad cameras, which used to be an official NASA equipment until Nikon digicams took their place. Winning bidders will get pictures specially printed for them on high-quality Kodak paper. But those who don't have cash to blow on vintage space images can still see them all: the whole catalogue's available for download from the auction house's website. In this article: astronaut, BuzzAldrin, hasselblad, photography, space, TheBigPicture
All products recommended by Engadget are selected by our editorial team, independent of our parent company. Some of our stories include affiliate links. If you buy something through one of these links, we may earn an affiliate commission.