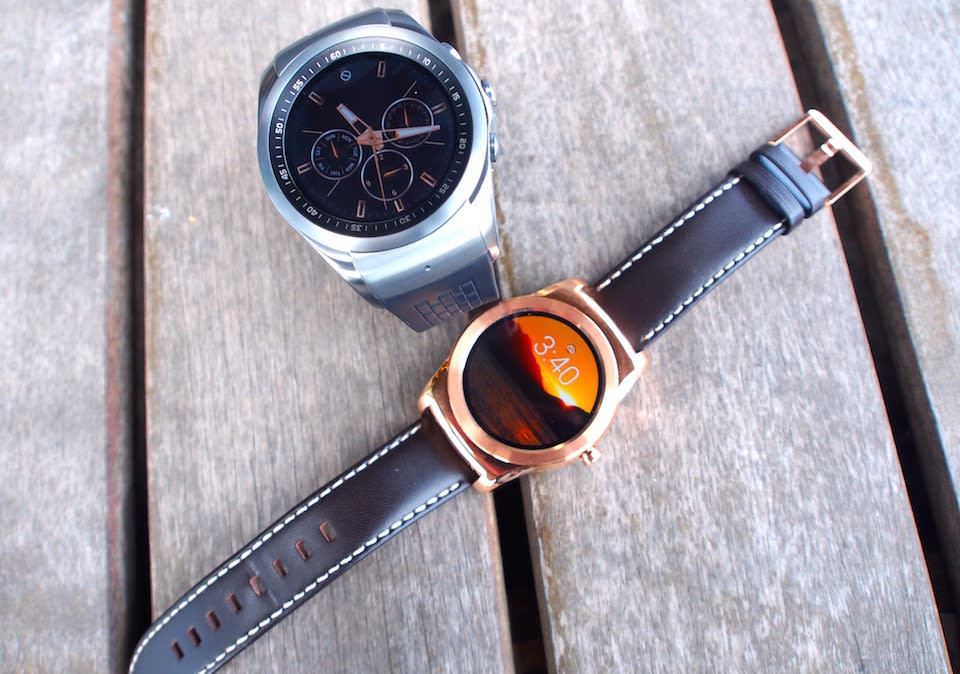 LG's been none too secretive about its latest pair of wearables -- hell, the Watch Urbane and the Watch Urbane LTE were revealed before MWC even really started. Both of them aspire to be what LG calls "smartpieces," proper luxury watches that also pull double-duty as digital companions, but do they actually live up to those high-minded aspirations? I strapped both of them onto my wrists for a little test drive ahead of their launch in a few months, so let's find out together.

As plenty of early reports suggested, the Urbane is the simpler (and arguably the classier) of the two watches. It's all gold or silver stainless steel as far as the eye can see, with a hairline finish etched into a ring that runs around the Urbane's round face. There's no getting around it: It's a pretty, pretty piece of gear, even if the rosy gold model comes off a little too ostentatious. Guess I just don't have enough swag to appreciate it. Look past the premium finish, though, and you'll see that the Urbane is really just a very pretty spinoff of the G Watch R. The 1.3-inch P-OLED screen? The 410mAh sealed battery? The Snapdragon 400 with 512MB of RAM? All of it's been plucked off the G Watch R assembly lines and plopped into a gussied-up body. This sort of form-over-function thinking could be problematic if LG slacked on the software, but hey -- it's an Android Wear device so it operates the same way all the others do.

Now I'm not the sort who's just rolling in fancy timepieces, but I've worn enough things on my wrist to know I prefer leather straps to metal ones. That's why I'm glad the Urbane ships with a thick, comfy leather strap, though that's really just a starting point -- you can swap straps as desired and LG briefly blitzed through a few more exotic options in a slideshow. For now though, we're left with a gorgeous device Meanwhile, the Urbane LTE is attractive in a different manner -- it's heftier in a reassuring sort of way, and it has more of a sturdy, almost masculine aesthetic. That body's hewn of stainless steel, too, and you definitely wouldn't want to get punched by someone who had this wrapped around their fist.

For a watch that packs NFC, a high-speed cellular radio and a battery nearly twice as big (700mAh) as its cousin, the Urbane LTE really isn't as thick as you might think. It's only really about two or three millimeters fatter than the regular Urbane is. It isn't terribly heavy either (LG didn't call out its weight this time), but the broader stretch of steel reaches farther across the wrist and can feel cumbersome before long. The Urbane LTE we played with had a thicker, stiff rubbery band installed, and I'm told that's going to be the stock strap when it ships in Korea within a few months. Unless you specifically wear it a notch looser than you usually would, you run the risk of the whole thing feeling a little Microsoft Band-y. 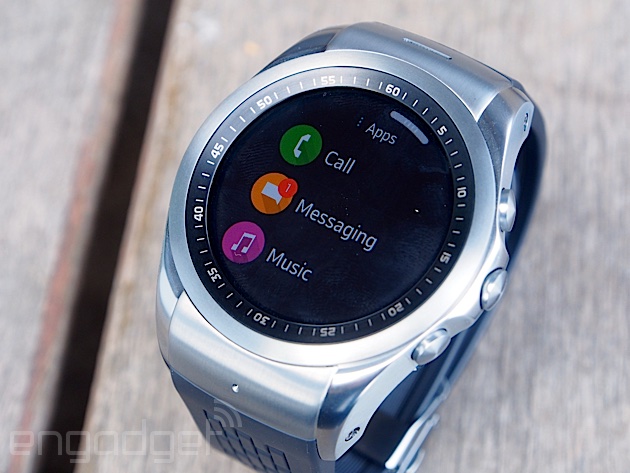 The differences don't stop there. The LTE version also has three buttons to the regular model's one: The top button brings up a circular settings screen, while the middle fires up the app launcher and the bottom takes you back one level. They'll take just a little getting used to, but they're absolutely necessary since we're not looking at bog-standard Android Wear on that 1.3-inch screen. Just as Samsung explored the idea of a Tizen-powered watch, LG traded Google's wearable OS for its own in-house Wearables Platform.

Yes, that technically means that deep down, the Urbane LTE runs on webOS, but it looks like LG has done its level best to hide that core with some intriguing in-house apps. Assuming your 4G connection is strong enough, you'll be able to fire up Golf and Running apps that provide vital information on your movements and a translator will try and take your spoken English and convert it into Chinese or Japanese (or vice versa). The company's experiment with webOS wearables might seem a little odd, but it was utterly necessary if they wanted to create a watch people could talk to each other with. We couldn't get a call to actually connect to another phone, but the faux-female voice on the other end informing us of our folly sounded pretty weak on the Urbane LTE's tiny speaker. You're going to need some Bluetooth headphones to really enjoy this thing, no matter how thrilling your Dick Tracy fantasies might be.

As it turns out, scrolling the long list of included apps is surprisingly quick, too. My time with Android Wear watches has been punctuated by streaks of frustration with how inconsistent touch inputs and scrolling performance can be. I won't say the Urbane LTE is completely immune to those issues, but they definitely didn't feel as obnoxious. Its slightly different innards are to thank for that; the LTE model has the same 1.2GHz Snapdragon 400 as the Urbane, but it's paired with a full 1GB of RAM. Whether or not performance stays that snappy over time is a completely different question -- we'll let you know one way or the other when we get our final review units. Stay tuned!

In this article: androidwear, lg, mobile, mobilepostcross, mwc2015, urbane, watch-urbane, watchurbane, watchurbanelte, wearables, webos
All products recommended by Engadget are selected by our editorial team, independent of our parent company. Some of our stories include affiliate links. If you buy something through one of these links, we may earn an affiliate commission.