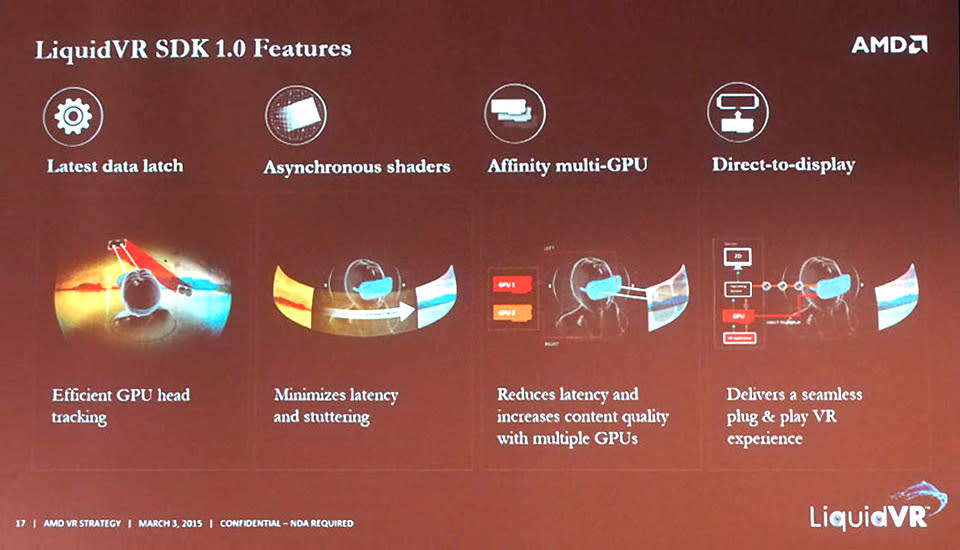 The latest Silicon Valley company to hop on the virtual reality bandwagon is AMD, this morning unveiling what it's calling "Liquid VR": a software development kit aimed at making VR easier for everyone. The announcement comes from a presentation at GDC 2015 in San Francisco, where virtual reality is dominating the news. What does Liquid VR do for developers and users? It essentially makes everything much easier. As one AMD rep put it during this morning's presentation, "You can plug an Oculus Rift into a computer and start 3D rendering directly to the headset, even without Oculus' SDK." In so many words, Liquid VR is yet another solution for making various VR headsets work easily on various devices; it also optimizes the use of that headset for that particular computer (no doubt powered by AMD's chips).

Liquid VR is AMD's first public step toward VR support, company reps said, with partnerships and more planned for the future. Oculus VR's director of engineering, Anuj Gosalia, says his company is "very excited" about the things AMD is doing in VR, and that Oculus is working on leveraging AMD's work in its own work. For instance, the ability to simply plug in a Rift headset and have it recognized as a VR headset rather than a new monitor. There are many more, far more complicated ways that the companies are working together, but this is the kind of stuff that will be invisible to most of us -- the kind of stuff that makes VR seamless. The first version of the SDK is available to "select" developers starting today; AMD is looking at this as the Alpha.

When asked about whether or not AMD is also working with HTC and Valve on the HTC Vive headset, AMD reps hilariously clammed up and asked whether or not they could talk about that yet. Sounds like the answer is yes!

In this article: amd, gdc, gdc2015, hdpostcross
All products recommended by Engadget are selected by our editorial team, independent of our parent company. Some of our stories include affiliate links. If you buy something through one of these links, we may earn an affiliate commission.