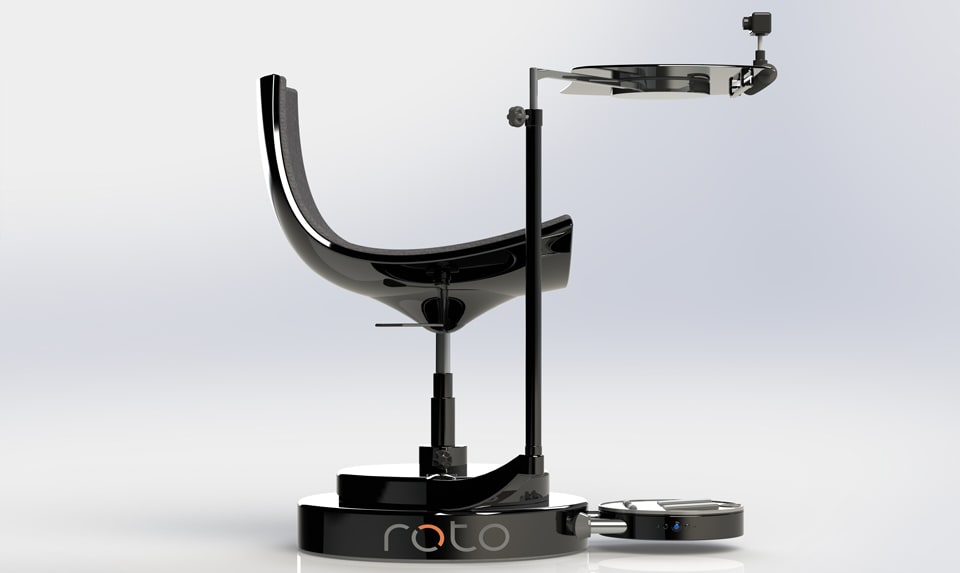 When donning a VR headset, it's easy to be awestruck by whatever 3D world you find yourself in. It's a whole new medium that simply can't be replicated on a TV. Still, there are reasons the likes of Oculus and Sony aren't selling headsets to the masses just yet. While Samsung's Gear VR and other smartphone-powered headwear are filling the void, headsets that tap into the processing might of PCs and consoles will ultimately deliver the most immersive experiences. But, the technology isn't quite there yet. Stereoscopic 3D can be jarring, with complicated worlds often appearing slightly out of focus. Then there are issues like nausea that can strike when moving through virtual surroundings. Also, how we interact with virtual spaces will continue to evolve, moving beyond the gamepad and keyboard to more natural and hopefully intuitive methods of control.

Headset hardware can only do so much to address these limitations, which is why several companies are developing peripherals intended to enhance the VR experience. Roto is one of these supplemental gadgets. Simply put, it's a motorized chair platform with a footplate controller you twist to control the direction and speed of the spinning seat. Describing it in so few words doesn't really do the Roto justice, however, as it's much more than an overcomplicated alternative to a mouse or joystick. Sure, it essentially performs the same function, but there's something about moving in time with your virtual avatar that brings a whole new dimension of realism to the VR world.

One of the primary aims of Roto is to give VR users a greater sense of freedom when exploring their virtual surroundings. With a VR headset, you're always focused on what's directly in front of you. Yes, you can turn your head in every direction to see what's beyond your peripheral vision, but we're not owls, and the human neck is only comfortable when your eyeline is centered, or thereabouts. This is true in real life, too, where the natural reaction is to turn your body to catch up with your head when it reaches more severe angles. This is essentially impossible in the VR world if you're seated in a fixed position, so instead of turning your body, you shift your point of view using a controller.

It's an important distinction, or at least it feels significant the first time you twist the footplate and the chair spins in the direction you've specified. You aren't forcing an avatar to give you a different perspective; you're physically changing the perspective in a natural way -- the way you would in real life. When using a controller, there's an inherent disconnect between where you are looking and where you are facing. Your neck is doing one and a computer is doing the other, but when both inputs are essentially physical ones, there's a much greater sense of presence. You're there, moving and looking around, not staring through the eyes of an avatar you've possessed. This is how I've felt when using VR headsets in the past, though I've only been able to articulate it now.

There are plenty of additional benefits that come with actually orientating your body to change your point of view. For one, your journey through the VR world is much smoother. Say you're moving around the bridge in Alien: Isolation (one of the games demoed with the Roto) and using a controller to change where you're looking. The scene tends to whiz or jerk by while you lock in the direction you want, and during that period of reorientation, you lose visual acuity (I liken this to standing in the middle of a carousel as it's spinning).

This doesn't happen nearly as much with the Roto, however, as you instinctively move through the virtual space like you would a physical space. And by this, I mean you start the movement with your head and follow it with your body, so there's a much more controlled progression between where you were facing and where you want to face, which more or less eliminates blur. It's not just a question of controller sensitivity, as I'm sure some would volunteer. It's that you're simply interacting with your environment in a different way -- a better way.

While Roto intends to improve the VR experience, it also wants to take something away: nausea. Some people are more susceptible to disorientation in the VR world than others, but it's not a personal problem; it's basic science. Your inner ear is, in part, responsible for maintaining balance. When you move, fluid in your inner ear moves too, which your brain uses alongside other stimuli to keep you upright. In the VR environment, your eyes are detecting movement, but your inner ears aren't, confusing your gray matter and, sometimes, inducing nausea. But obviously, you are actually moving when sitting in the Roto -- hence, less chance of disorientation and feeling sick as a result. 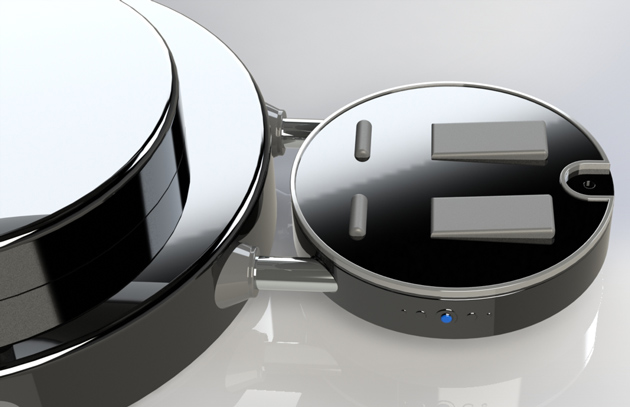 I can read in cars and sleep on boats, so I can't tell you how much of an effect it has on nausea when it's something I've never experienced during my brief spurts behind a headset. What I can say, though, is how your brain interprets movement in the Roto has a greater impact than simply reducing the chances of feeling queasy. The folks behind Roto use the term "gravitational presence," and what they mean by that is feeling your physical self in the virtual space. An avatar has no body and no weight, so when you're controlling one with a stick or a mouse, there's no sense of resistance. But when you're spinning around in the Roto, you're always accelerating or decelerating. You can feel the slight centrifugal force that's pulling you out of your chair, and your own mass fighting against it. Your body is reacting too, of course, making unconscious corrections in your core muscles to keep you stable and comfortable.

You're aware that your body is moving, and as this movement is in sync with what's in front of your eyes, the barrier between the virtual world and the real one becomes blurred. As I said before, it becomes much less of an out-of-body experience. The avatar ceases to exist. You are the avatar; the in-game character is you.

But as fascinating as my experience with the Roto is, I'm sure you'd be keen to hear some of the technical details, too. The prototype I checked out was a bit of a monster, with a gaming PC built into the base, but there was also a mockup on hand that's apparently closer to the size of the real product (though still bigger, I'm told). It's supposed to be about the size of a normal swivel-chair base, most of which will be taken up by the motor. On that note, the motor will be capable of swinging you round pretty fast for when you need to kill that alien creeping up behind you, but not so fast that you feel like you're on an amusement park ride -- inducing nausea is the opposite of the point, remember. The motor will also calibrate to the weight of the person in the chair, so if you switch seats with your six-year-old cousin, they won't go flying off because the Roto thinks it's moving a much larger adult. 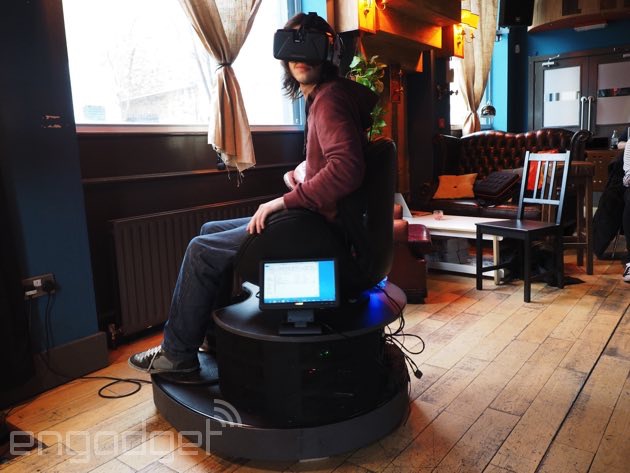 The footplate you use to control the speed and direction of the chair (it's analog, so the farther you twist, the faster it goes) will stick out from the base and sit where your feet naturally rest. While it wasn't connected on the demo unit I tried, the final version will have touchpads built into the footplate that you'll be able to tap to walk in some games. Whether this will be intuitive and make you put down the controller entirely is another matter, but I'll reserve judgment for now as I wasn't banking that a motorized chair could change my experience of VR as drastically as it did. The touchpads will work via simple controller-mapping, which brings us to another important feature of the Roto. It's an entirely passive experience, in that it's rotating you in a direction and the headset is registering that rotation.

Thus, developers don't need to build in support for the Roto, as it works independently of whatever is happening inside the headset. The Roto team does have an SDK, however, which others can use to move the chair against your will. The idea is that a VR movie director can let you explore certain scenes and swing you toward the action when the timing is right -- directing you, as it were. I can also see this being useful to game devs, as they can take control away during cut scenes, for example, or guide you when you're stuck. Think of a VR Resident Evil title, and just when you assume you're safe, the chair swings you to face a window as zombies begin streaming through. 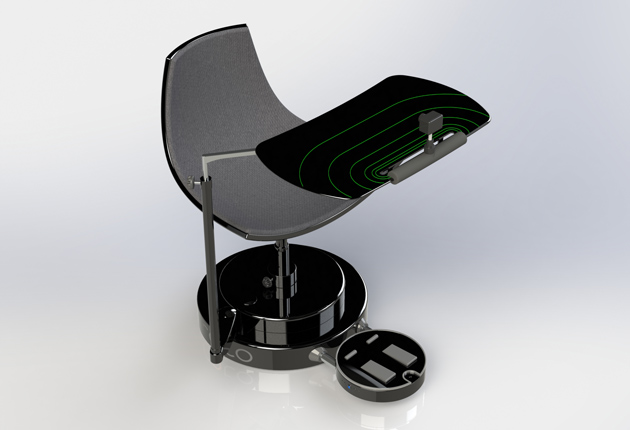 One of the issues with swiveling around in a chair while wearing a tethered headset like the Oculus Rift is getting tangled up in cables, which is why the Roto employs a slip-ring design to negate this. You connect your PC to the lower part of the motorized base, and the headset to the top. The PC inputs pass through the slip ring and exit through the headset adapter, which spins with the chair, avoiding strangulation by HDMI cable.

Roto will be launched via Kickstarter, with the campaign going live on March 12th. The team is well aware of the stigma around Kickstarter, but says it won't be able to produce the product any other way, so crowdfunding is its only shot right now. The plan is to sell the base and the footplate for under £200 (around $310), with the option of adding a chair of its design and a table attachment for keeping mouse/keyboard/joystick setups, depth-sensing cameras like Oculus' DK2 and other peripherals in front of you, and rotating with you. If you just want the motorized base, you can clamp in your own swivel chair. I'm told the majority of designs will be supported, but not all.

Because of its relatively small footprint, the Roto seems to me a much more viable option than other supplements like omnidirectional treadmills that have received attention in the past, and have promised to enhance the VR experience in similar ways. The Roto is a much less intrusive piece of kit, and it's important that you're still able to sit down and relax. Within a minute of sitting down, using the footplate became second nature, but I wonder if I were to play around outside of a hands-on scenario, how long before I defaulted back to the standard gaming-control schemes I've used all my life? I challenged one of Roto's founders with this reaching question, to which he had a frank answer. He simply said that if that were the case, "then we're doing it wrong."

Source: Roto
In this article: chair, motorizedchair, roto, uk-feature, virtualreality, vr
All products recommended by Engadget are selected by our editorial team, independent of our parent company. Some of our stories include affiliate links. If you buy something through one of these links, we may earn an affiliate commission.