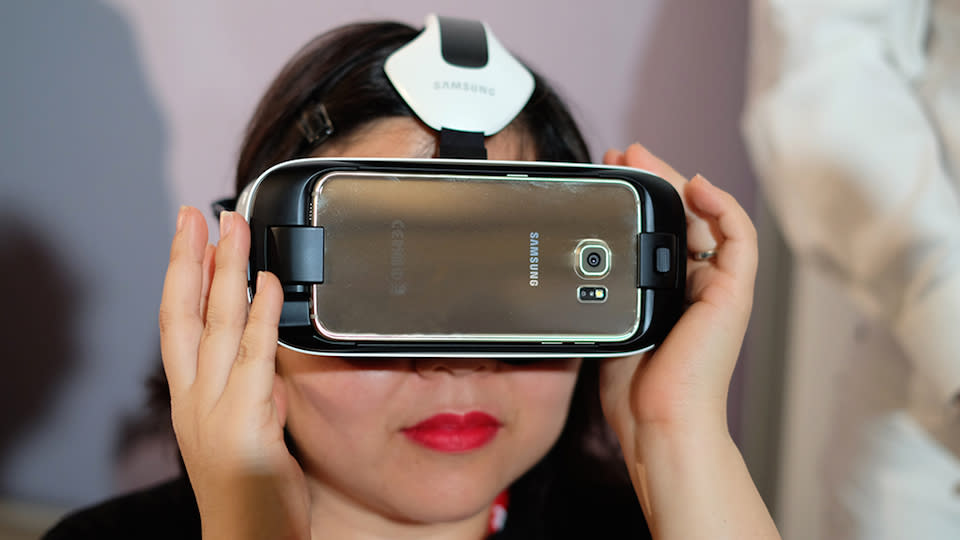 The HTC Vive might've stolen some of Samsung's thunder, but it bears reminding that the latter did announce a new VR headset earlier this week. Sure, the Gear VR for the Galaxy S6 is only slightly different from the original Note 4 edition, but even minor tweaks can spell big improvement. It's smaller, lighter, has a wider focus margin and there's a new strap design that promises to make the headset much more comfortable than before. I had a chance to give it a spin earlier this week and I also talked to Max Cohen, VP of mobile at Oculus, to get his take on the new hardware, possible future updates and, of course, his opinion on the HTC Vive.

The new Gear VR for the Galaxy S6 and the S6 Edge is about 15 percent smaller than the one for the Note 4. That doesn't sound like much, but I could feel it the moment I put it on. It simply feels lighter compared to the original and I found it fit much nicer on my admittedly small head. Part of the reason for this, Cohen said, was not only because the S6 is smaller than the Note 4, but also because Samsung redesigned the overall weight distribution of the headset. The counterbalance is better, he said, and there's a touch more padding on the rear strap, both of which contribute to the increased comfort.

Another big difference is the display quality. I played a round of Climate Studios' Bandit Six where I shot planes out of the sky by tapping the touchpad and watched a video clip set inside a virtual theater on Oculus Cinema. Everything looked pin sharp and I felt completely immersed in the environment. Of course, part of this is because the S6 has a better display than the Note 4. While the S6 and the Note 4 have the same resolution, the S6 has a higher ppi -- 577 compared to the Note 4's 518. The result is that there's now less of a screen door effect and everything appears much sharper than before . The tradeoff, however, is that the field of view is smaller compared to the Gear VR for the Note 4. "Oculus believes that field-of-view drives VR," said Cohen. "So for us, the new Gear VR is not better; it's different." Yet, the new Gear VR does come with a few other neat features that the original just doesn't have. The focus ring adjustment now goes much further in both directions, to accommodate those with eyesight that's better than 20/20 and to provide greater focusing range in general. There's also a mechanical fan for cooling your sweaty brow and to prevent the lens from fogging up. Last but not least, while the original Gear VR had a cover for shielding the Note 4, the new one doesn't. "That cover was just cosmetic," Cohen said, and they just decided not to do it with the new version.

"It's still an Innovator Edition," said Cohen of Gear VR. "We don't think it's ready for the full-on walk into any store and buy it experience." Even though the original Gear VR is available to buy from Best Buy, Cohen said that it's still only really for enthusiasts and early adopters. "The S6 version is a continuation of what we started with the Note 4. We're specifically not trying to sell as many of these as we can."

I asked if the company plans on making further iterations on Gear VR, or if there's a possibility of a universal headset so that you don't have to get a new one every time there's a new phone. That, he said, is mostly Samsung's call. Still, that's probably a long ways off. "There's a lot of room to improve still, and that's why it's the Innovator Edition," he said, pointing out that even though the S6 version debuted only four months after the launch of the original, it already has new features like the fan and focusing ring. "We might get to a steady state some time in the future, but right now it's still very early ... we want to make sure we deliver the best possible experiences at all times." Cohen also gave a brief insight into its push into commerce with the preview of the Oculus Store launching this week. "We're building a new platform from scratch," he said. "We've been working with developers ... now we get to put out an initial batch." About eight to nine full-length games will launch over the coming weeks, he said, with a good cadence of titles going forward. Pricing will range from $2.99 to $4.99, at least initially.

As for what he thinks of the HTC Vive? "From what I've seen, it looks interesting for us as a company. It's not about being first or second, it's about building up VR. We know Valve will make a good experience. It's great for VR, getting people excited for VR. It's a net positive."

I wondered out loud to Cohen if Oculus would ever go a software-only route and get its experience in more than just Samsung headsets. "Comfort is very important to Oculus and hardware is important to achieving presence," he said, noting that they don't plan on moving away from hardware any time soon. "We're not in a rush for commoditization. We have a technology edge that we hope to maintain for some time."

In this article: facebook, galaxys6, galaxys6edge, gearvr, maxcohen, mwc2015, oculus, s6, s6edge, samsung
All products recommended by Engadget are selected by our editorial team, independent of our parent company. Some of our stories include affiliate links. If you buy something through one of these links, we may earn an affiliate commission.