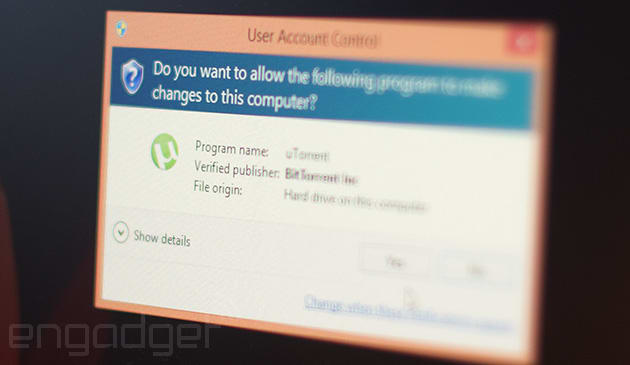 If you recently installed or updated uTorrent on your PC, you may have have picked up an unwanted passenger: a bitcoin miner called Epic Scale. If you don't pay attention, that piece of code can be inadvertently installed with the latest uTorrent build (version 3.4.2). It can then use your computer as part of a bitcoin farm (Litecoin, to be exact) to generate revenue for third parties. Users first reported the situation on uTorrent's forums, and it was quickly confirmed by a senior support manager. He said that the app "cannot be installed without permission," but one user claimed that there was "never a warning about it," even though he opted out of other bundled software.

Once it's installed, the program will take up CPU cycles, slowing your machine and causing it to burn more power. The support person described Epic Scale as "easy to uninstall," but some users reported otherwise. One said it didn't show up in the "Programs and Features" list for Windows, and another needed anti-adware software to be rid of it. (Epic Scale said the app can be uninstalled normally, but confirmed that it leaves behind registry keys.)

"We have reviewed the issue closely and can confirm there is no silent install happening." -- BitTorrent

uTorrent's parent company BitTorrent has denied that the software is installed without user consent, and told The Verge "we have reviewed the issue closely and can confirm there is no silent install happening... most likely, the users accepted the offer during the install." I attempted to install the software on my own PC, and can confirm that the software gave me the chance to decline or accept the "offer" -- though it could easily slip by a careless user. If it does, most antivirus companies have confirmed that Epic Scale isn't dangerous, though it could certainly be a performance-sapping nuisance.

BitTorrent said that the Epic Scale is "a great partner for us to continue to generate revenue for the company, while contributing funds to (philanthropic initiatives)." With the recent Lenovo SuperFish affair, however, users are on edge about unwanted software. One uTorrent forum user called Epic Scale's unexpected presence "quite a pity," adding "I will switch because of this."

Update: BitTorrent told The Verge that the Epic Scale software is not a "silent install," and we've confirmed it ourselves. It also told us that the user forums where the thread started may be down, and that no users' accounts have been suspended. The post has been updated with that information.

Source: uTorrent (forums)
Coverage: Trusted Reviews
In this article: Bitcoin, Bitcoin Farm, BitTorrent, bloatware, download, EpicScale, Mining, uTorrent
All products recommended by Engadget are selected by our editorial team, independent of our parent company. Some of our stories include affiliate links. If you buy something through one of these links, we may earn an affiliate commission.