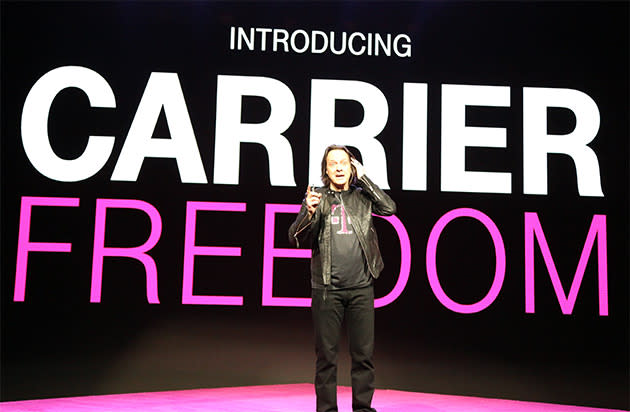 Most of John Legere's time spent on stage dealt with T-Mobile's bid to play nice with businesses, but average consumers just got a few bones here, too. First up is Carrier Freedom, a new spin on the company's Contract Freedom initiative that'll see T-Mobile pay not just your early termination fees, but remaining payments on your phone if you're stuck in a plan like AT&T's Jump or Verizon's Edge. As long as you owe your current carrier $650 or less, you're golden. That's solid news for new, would-be T-Mobile customers, but Legere outed what he calls the "Un-contract" for customers who already bleed magenta. If you've already landed yourself one of T-Mobile's cushy promotional plans, congratulations -- they're going permanent as of March 22.

"Your rates will never go up," Legere boomed to (mostly employee) applause. "But they might go down."

The only real caveat to the Un-contract proposition is if you're clinging to one of T-Mobile's unlimited data plans. While huge rivals like AT&T and Verizon have treated customers with grandfathered unlimited plans like second-class citizens by throttling speeds after thresholds are hit and barring them from tethering, Legere is enacting a sort of data détente that means he won't change the terms of the game for at least two years. As he puts it, he can't zoom out and see how things will shift over the next ten years, but it's a nice little reprieve for folks clutching onto those plans like their lives (or wallets) depend on it. Between a renewed focus on making business plans less of a headache and these thoughtful nods to us consumers, T-Mobile's coming out swinging in 2015 -- the only question now is how much all this actually moves the needle.

In this article: carrier, mobilepostcross, t-mobile, tmobile, uncarrier
All products recommended by Engadget are selected by our editorial team, independent of our parent company. Some of our stories include affiliate links. If you buy something through one of these links, we may earn an affiliate commission.