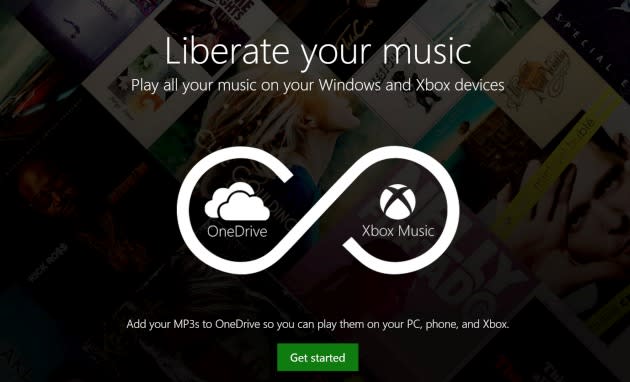 A few months ago info leaked out that OneDrive was getting ready for music storage, then Microsoft confirmed, and now it's here. Starting today, Xbox Music and OneDrive are connected so any music files (MP3, M4A, or WMA) in your "Music" folder on Microsoft's cloud storage service are immediately playable via the web or Xbox Music apps on Windows 8, Windows Phone 8.1, Xbox 360 and Xbox One -- for free. The initial leak suggested there would be 20GB of storage, but Xbox Music's paying Music Pass subscribers will get an additional 100GB of space.

It's very similar to Google Play Music's free cloud storage offering, but the only problem is that Microsoft's OneDrive link won't reach Xbox Music on your Android or iOS phone, and Google Play isn't on your Xbox. Meanwhile, on PlayStation a coming Spotify integration will replace the Music Unlimited service that very few people were using, and of course Amazon has its Cloud Player. While Microsoft has found a way to get us using its cloud service more (playing custom mixes during Xbox One games should be easy now), choosing when and where to upload each file is only more complicated. In this article: cloud, hdpostcross, microsoft, mp3, Onedrive, Windows8.1, Xbox360, XboxMusic, XboxOne
All products recommended by Engadget are selected by our editorial team, independent of our parent company. Some of our stories include affiliate links. If you buy something through one of these links, we may earn an affiliate commission.