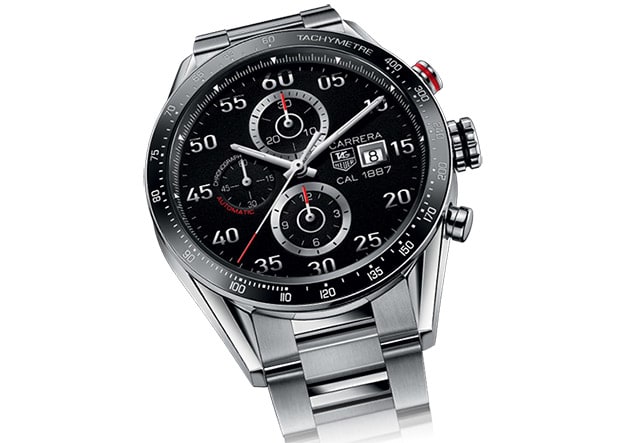 Tag Heuer's all set to take on the Apple Watch, and it's slated to reveal the new device sometime today. If you recall, the Swiss company has said that it's also making a smartwatch shortly after Cupertino announced its own last year. According to Reuters, Tag Heuer's parent corporation LVMH has teamed up with Intel to create a digital version of one of its most iconic models: the original black Carrera pictured above. It will reportedly still look like the non-digital version, except it will be able to track geolocation, the distance you've walked and your current altitude.

Pocket-lint says Google also had a hand at creating the fancy gadget, but Mountain View hasn't confirmed that report yet. In an interview with the company from back in January, though, CEO Jean-Claude Biver admitted that only the watch itself will be made in Switzerland. The chips, apps and other components that make it digital will be manufactured in Silicon Valley.

While we still don't know whether Cupertino's wearable will affect luxury watchmakers' sales (it's not even available yet), Biver only had fighting words to say during his recent interview with Reuters: "Apple will get young people used to wearing a watch," he told the news agency, "and later maybe they will want to buy themselves a real watch." But then again, is anybody surprised? Biver has never been held back in showing his contempt for Apple's creation; he once even said that it "looks like it was designed by a student in their first trimester."

We'll find out more details about Tag Heuer's entry into the smartwatch industry by 9AM Eastern time. Hopefully, that includes its price and availability, so interested customers can make an informed decision before the Apple Watch drops.

Source: Reuters
Coverage: Pocket-lint, Bloomberg
In this article: apple, AppleWatch, mobilepostcross, SmartWatch, TagHeuer
All products recommended by Engadget are selected by our editorial team, independent of our parent company. Some of our stories include affiliate links. If you buy something through one of these links, we may earn an affiliate commission.