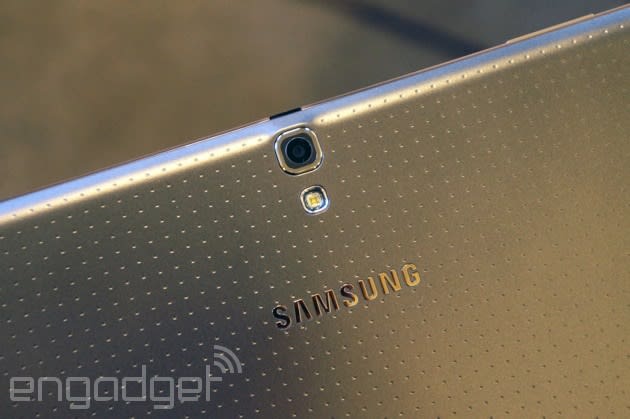 Only a few weeks after Samsung revealed it's preinstalling Microsoft's apps on the upcoming Galaxy S6 and S6 Edge, the two companies are getting even closer. Microsoft just announced that Samsung will also be bundling its Office apps, Skype, and OneDrive on select Android tablets sometime in the first half of the year. And when it comes to tablets Samsung sells to businesses, the Microsoft apps will also work together with its Knox security offering, which makes devices more secure and lets you switch between personal and professional profiles. That's what you call synergy, folks. Microsoft's been struggling to make a dent in the mobile market with Windows Phone, so it makes sense for it to team up with the biggest player on the largest mobile platform to promote its services. And of course, the integration with Microsoft's apps -- especially Office -- makes Samsung's wares a worthier option for businesses.

"Great things happen when you converge services and devices," Peggy Johnson, Microsoft executive video president of business development, said in a statement. "Our partnership with Samsung is emblematic of our efforts to bring the best of Microsoft's productivity services to everyone, on every device, so people can be productive wherever, however and whenever they want."

Microsoft's also delivered some solid Office apps for iOS, including one of the best email apps on Apple's platform with the new Outlook. At this point, its new mobile plan seems pretty simple: Bring its offerings to as many platforms as possible in the hopes of bringing more people to its ecosystem. That may be disappointing to Windows Phone fans, but it's a smart move for Microsoft, which has more to gain by building up its cloud platform than trying to catch up in mobile.

Source: Microsoft
In this article: Android, microsoft, mobilepostcross, Office 365, samsung
All products recommended by Engadget are selected by our editorial team, independent of our parent company. Some of our stories include affiliate links. If you buy something through one of these links, we may earn an affiliate commission.