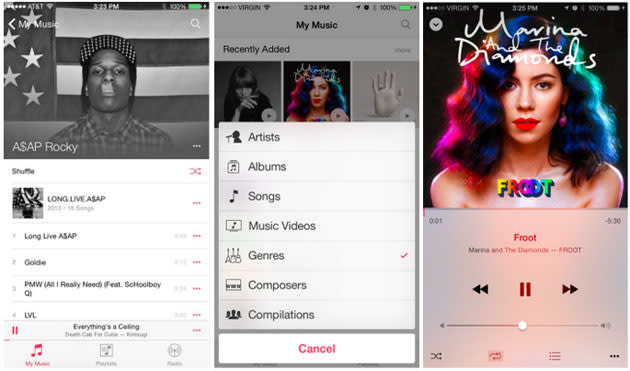 Think that iOS' music player is overdue for a remake? You're going to get your wish. Apple has released the first iOS 8.4 beta to developers, and its centerpiece is a shiny, new Music app. The refresh includes at least a few long-sought changes, including some borrowed from iTunes: There's a mini player that sticks around while you're browsing, global search and an "Up Next" song queue. You'll also see a sleeker iTunes Radio interface that helps you discover new tracks. There's no sign of the Beats-based music service rumored to come alongside 8.4, but that's not supposed to show up until Apple's developer conference at the earliest -- if it exists, it's probably going to stay under wraps for a little while.

Update: For a look at the new app in action, check out a video hands-on from Youtuber DetroitBORG embedded after the break.

In this article: apple, beta, ios, ios8.4, ipad, iphone, mobilepostcross, music, smartphone, tablet, video
All products recommended by Engadget are selected by our editorial team, independent of our parent company. Some of our stories include affiliate links. If you buy something through one of these links, we may earn an affiliate commission.