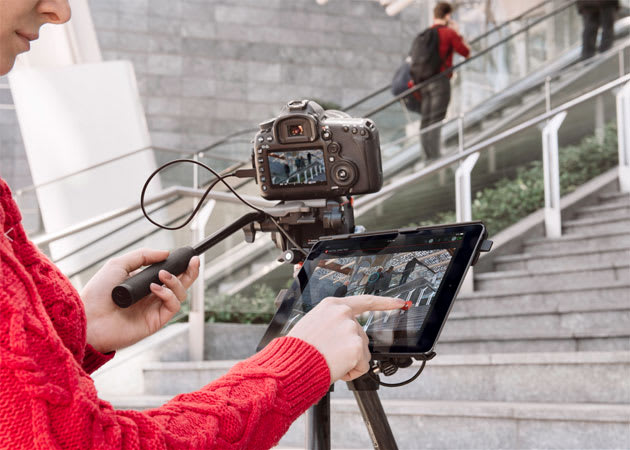 Manfrotto isn't just content with making tripods and backpacks for your camera -- it wants to improve the camera itself. The gear designer has unveiled the Digital Director, an adapter that turns your iPad into a remote controller for Canon and Nikon DSLRs. It's not wireless like its biggest rival, the CamRanger, but it still gives you a giant viewfinder and control over virtually every facet of your shot, from the aperture to manual focusing. Think of it as a conventional remote control app that doesn't require lugging a full-fledged computer to your photo shoots. Be ready to pay for that portability, however. The Digital Director will cost $500 when it ships in June, so it's clearly meant more for pro work than augmenting your hobbyist photography.

Via: SlashGear
Source: Resource Online
In this article: camera, digitaldirector, dslr, ipad, manfrotto, nab, nab2015, photography, remote, tablet
All products recommended by Engadget are selected by our editorial team, independent of our parent company. Some of our stories include affiliate links. If you buy something through one of these links, we may earn an affiliate commission.