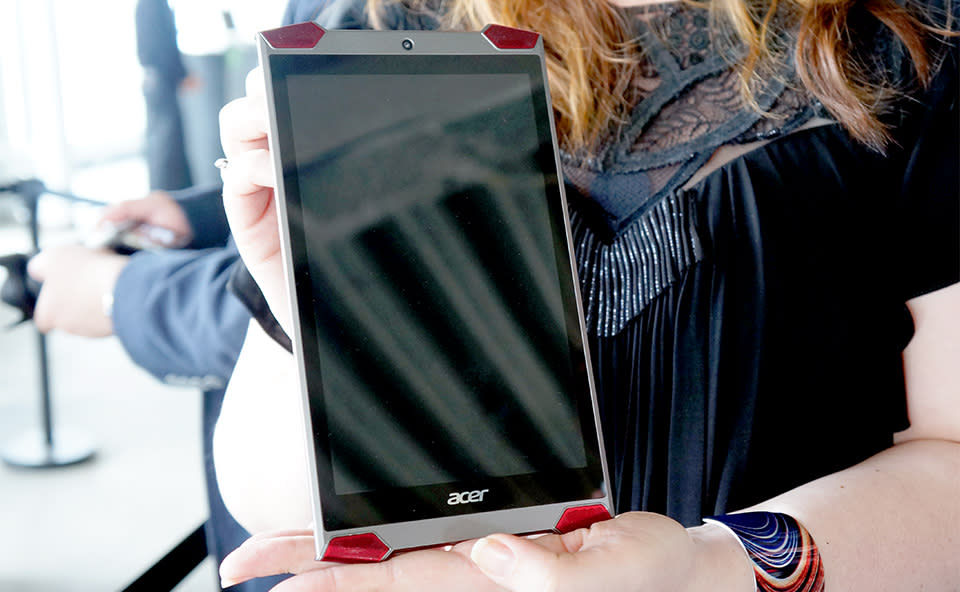 It's safe to say that Acer's gone a little batty this morning - the company crammed announcement after announcement into a press conference overlooking the New York City skyline, but some of the most interesting stuff didn't get much detail. Case in point: The company's working on an Android-powered Predator tablet to go along with its series of angular, red and black gaming PCs and it's going to launch by the end of 2015.

At this point though, there are far more questions hanging in the air than answers. All the company spokespeople I've cornered have been able to confirm is that the tablet is slated for a launch during the fourth quarter of the year, and that the pointy, vaguely futuristic design you see above should stay the same right through launch in Q4. Yeah, we're not huge fans of the look either, but an Acer spokesperson gleefully pointed out how the tablet's triangular accents and crimson flair appeared throughout company's updated gaming lineup. An Acer exec also briefly talked up a haptic feedback feature while on-stage, so the tablet should rumble in your hand while you're taking hard corners in Asphalt 8 (or, you know, what supported title the company will soon play up).

In addition to an 8-inch screen (no one on-site was sure of its resolution), Acer seems particularly proud of a quartet of front-facing speakers nestled into the tablet's corners that'll blast the dulcet groans of dismembered zombies in Dead Trigger 2. The rest of the particulars are sadly shrouded in mystery, but it's really no surprise why -- with a launch so far off, Acer itself probably isn't sure what's going to wind up inside it.

Of course, the bigger question is whether this thing even stands a chance. The market for gaming tablets is a pretty underserved one as it stands -- you've got the generally wonderful NVIDIA Shield tablet with its Tegra K1, and a bunch of off-brand options that make great fodder for YouTube videos. Acer's attempt may well be the right product at the right time... or it could serve as proof positive that people don't actually want or need dedicated gaming tablets. It's always the generalist tablets that seem to sell the best (probably because they don't actively alienate anyone), but hey: We won't turn this thing away should one land on our desks for review.

In this article: acer, android, gaming, predator, tablet
All products recommended by Engadget are selected by our editorial team, independent of our parent company. Some of our stories include affiliate links. If you buy something through one of these links, we may earn an affiliate commission.