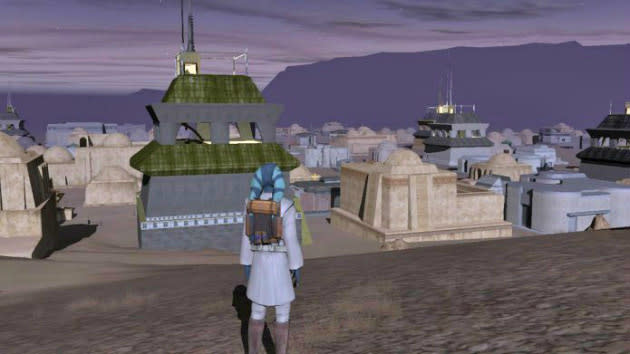 "Well, my opinion is Jedi are evil." That's how Raph Koster, creative director of the 2003 MMO Star Wars Galaxies, begins discussing the problems that faced his design team back in the day. Jedi were too powerful, too desirable and too canonically rare to be successfully implemented in Star Wars Galaxies as a standard class -- and this was precisely why so many fans ditched the game when its third major patch added Jedi as a starting character. Before launch, the Star Wars Galaxies creative team obsessed over ways to implement playable Jedi into the game, and one solution stands out to Koster as "the crazy idea I still wish we had done." Inspired by Diablo's Hardcore mode, it was a system "that effectively gave a different way to play the game. A method that kept Jedi rare, powerful, and yet allowed everyone a shot," Koster writes. This solution was, in a word, permadeath.

Koster's idea had players start with an additional character slot locked to the Jedi class. These Jedi would start out as "weak as a kitten," and they'd build up their powers by using and practicing the Force. The twist was, whenever a Jedi used the Force in range of anything Imperial, Darth Vader's Death Squadron would be alerted and someone would hunt the player down with a mission to kill. It would start with Stormtroopers, then build to harder bounty hunters like Boba Fett, and eventually, Darth Vader himself. Not many people would make it to Vader, though.

"These would be brutal fights," Koster writes. "Odds are you'd just die. So hiding and training very carefully would be essential. But it wouldn't matter, of course. As you advanced, your powers would get 'noisier' and cooler." And when you died, you died. Your stats would be posted to a leaderboard where other players could admire how far you made it, but if you wanted to be a Jedi again, you'd have to start over. Also, any Jedi that fought Darth Vader would die, guaranteed. "It would be rigged," he says. Players who made it that far wouldn't be totally out of luck, however: They'd get a special emote for their main character that would allow them to summon the ghosts of every Jedi who had made it to Vader.

"All the bragging rights would carry over to your other character," Koster writes. "Heck, I had a picture in my mind of the most amazing player summoning up not one, but a whole set of them -- the most badass player would have a coterie of Jedi advisors, hovering around their campfire, as they showed up."

The powers that be, however, didn't enjoy the idea of permadeath, so the Jedi sub-class never happened. In his blog post, Koster runs through the myriad problems that assailed Star Wars Galaxies' development, demonstrating once again how complex and risky it is to build any MMO. It's an honest and enlightening read.

In this article: hdpostcross, LucasArts, SonyOnlineEntertainment, StarWarsGalaxies
All products recommended by Engadget are selected by our editorial team, independent of our parent company. Some of our stories include affiliate links. If you buy something through one of these links, we may earn an affiliate commission.