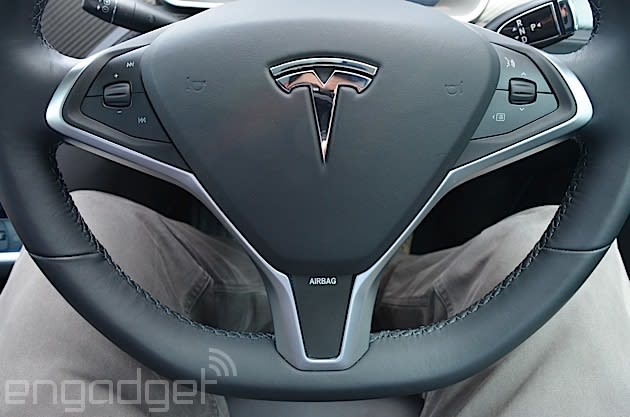 Tesla's not-so-secret plan to fill the world's homes with giant batteries could involve leasing them, according to a report from The Guardian. The batteries have apparently already been leased to customers of SolarCity, a renewable energy firm chaired by Tesla CEO Elon Musk, as part of a small pilot program. Customers were asked to finance a $1,500 down payment followed by $15 monthly payments for 10 years. That puts the overall cost of a 10-year lease at $3,300, or $27.50 per month. According to the report, the cost is further reduced by subsidies from energy companies, which support the idea as it reduces the load on their networks during peak hours.

Why would you want a huge battery in your home? There are a few benefits. The batteries leased to SolarCity customers are able to store energy (up to 15kWh in the trial) from renewable sources locally, rather than feeding it back into the grid when you're not using it. Even if you haven't fitted your roof with solar panels, the batteries can still pull in power from the grid when it costs the least, and then power a home during peak hours, reducing your energy bills considerably. For context, an average American house uses just under 30kWh of energy per day, meaning you could expect to get through the peak hours without much difficulty. The battery packs can also act as an uninterruptible power supply (UPS), keeping your electronics on during power outages.

Tesla has invested heavily in batteries, partnering with Panasonic on a "Gigafactory" in Nevada that is expected to produce 50 million kWh of batteries per year by 2020. They're obviously of huge importance to its electric car business, but selling giant units for home use could be a lucrative source of income for the company. It's worth noting that today's news comes from a single source, an analyst who says he's spoken to multiple members of the SolarCity trial. There's no word on whether Tesla will stick with its trial payment system, or go for something entirely new (the company declined to comment on The Guardian's report), but full details on the plan are expected later this week.

Via: The Verge
Source: The Guardian
In this article: tesla
All products recommended by Engadget are selected by our editorial team, independent of our parent company. Some of our stories include affiliate links. If you buy something through one of these links, we may earn an affiliate commission.